I’d rather attach myself to one.

I got the following e-mail in my inbox last nite:

Oooooooh, KRAZ E — sounds appealing! And for free, no less? Glad I opened it because this is my last day…

Get out of my life eHarmony.

So yeah… I told you all about my ‘experiment’ with eHarmony a few weeks ago… If you haven’t read that entry I highly recommend you do so. It’s sort of a companion piece to this one. They keep sending me matches even tho my 3 month subscription has been over. I never open the e-mails — if I had I would have seen how easy it is to stop the e-mails — but this one I had to open. Here’s what was on the inside: 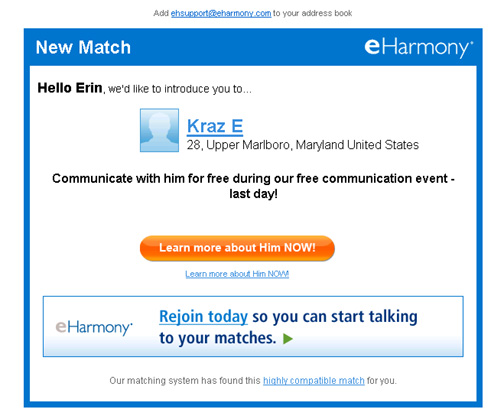 So this website believes that I am highly compatible with a person who uses “Kraz E” as a moniker on a matching site? WORD? At first I thought maybe it was accurate because anyone who would do such a thing must also be a comedian… But then I started to get a little pissed — do they just start sending effed up matches to people who quit them? Are these just sour grape hate darts — the Internet dating site equivalent of a schoolyard dozens battle (“Yeah, well that’s why yo’ mama…”)

Fa real, eHeezy, you’d like to intoduce me to Kraz E? Well, I have no desire to learn more about this person. And certainly not NOW with an exclamation point (!) Booooo Friggin Booooo!

OK, so I was in my favorite store (CVS) tonite — as I am most nights — and as I was looking for some mailing labels, I came across Snuggies for sale on the value aisle… 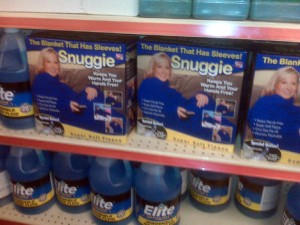 Now, I was under the impression that Snuggies weren’t available in retail stores — that they could only be ordered through their official website. But apparently I was wrong. That or CVS is bootlegging Snuggies, in which case I apologize profusely for this post — I’m not trying to get you caught out there C-to-the-V…

All my friends know how much I love CVS. I’m always letting them know about the deals I find — trying to convert the non-believers. Please see the text convo between me and my girl Sandi:

Haha. Cvs really does have EVERYTHING!

I been trying to TELL you…

Anyway, as you know I already have a custom NFL fleece Snuggie, made for me by my girl DWJ… 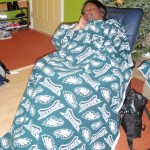 But I couldn’t pass up the chance to pick up the authentic Snuggie. Because I really want to attend the Snuggie Pub Crawl in DC and I’m not sure if you can do it without an official Snuggie… I’m getting a little discouraged though because I’ve still yet to be notified when the DC Snuggie Pub Crawl is taking place. I joined the mailing list, but we’re almost out of Snuggie weather so I’m wondering if they’re gonna nix some of the cities.

And yes, I’m so serious. First, they’re donating proceeds from the event to charity (or at least they better be!!!) And second… do you know how HILARIOUS that would be?!? I would do a two-camera shoot and recruit a crew of correspondents and hit the streets. Talk about a video blog that writes itself. Drunken Snuggie Monks roaming the Cap City. Man oh man… I really hope I get the chance. 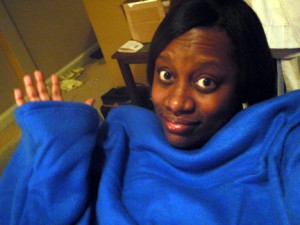 Anyway, that’s me in my new Snuggie. Don’t be a hater. You know who you are ;) Holler.