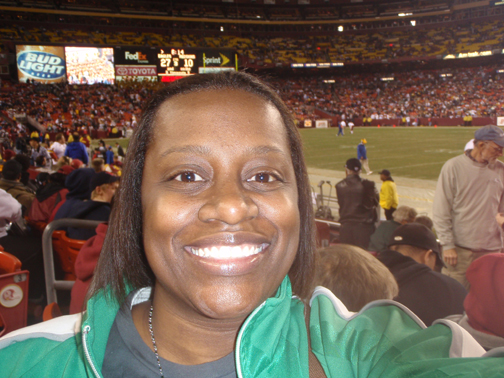 Thanks of course to BFF Angi who worked for the NFL until last winter, I was able to score great tickets to Monday’s game in DC.  I had seats on the 100-level. 4th row on the 30-yard line. FAN-tastic!!! 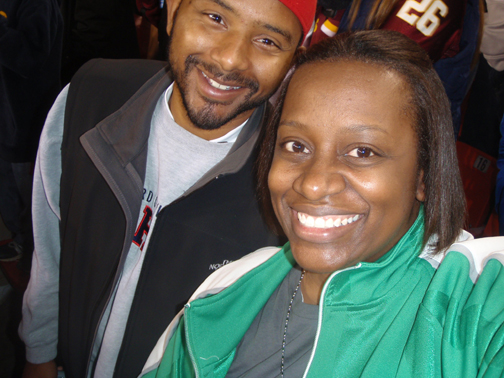 Brought my sports and home repairs boyfriend Kenny with me. This is beginning to become a regular yearly date for us. I think this is year 3. The game started with another amazing TD off a return from #10 — that boy is going to be a BEAST. But Brian Westbrook also went down with a really serious concussion in the 1st quarter. It was so scary. He wasn’t moving. Players from both teams were on their knees praying… I was glad to see him be able to walk off the field. But I hope he doesn’t try and rush back before he’s healed. #29 can take up that slack. GET BETTER B-WEST!!!

The one thing I learned about really good seats is that nobody sits when they’re in front. I don’t understand this since we had a completely unobstructed view of the field… But we had to stand for the whole damn game. It was ridiculous. There was a guy in our row who’d scored great tickets and brought his kid. And the kid couldnt see a thing. He spent the whole time watching it on the monitor and was super bummed. The father asked the FedEx Field employee in our section whether he could ask the people in rows 1-3 to sit so his kid could see — he paid like $150 for two tickets — and the guy told him no. The dad got pissed and almost got asked to leave… Glad he calmed down. I would have hated to see them thrown out… 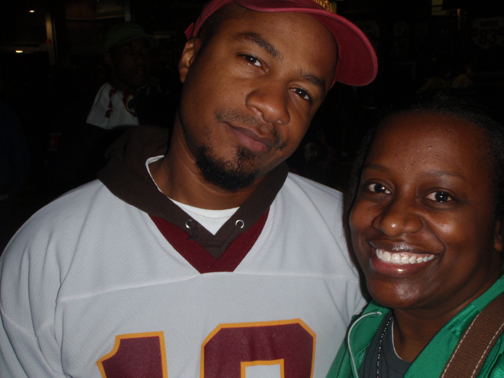 This is me with my good buddy, the hilarious Odyssey Michaels — a D.C. native and huge Skins fan. He tailgated all afternoon, and then… Poor he. I told him we look like the real life version of the comedy/tragedy masks. 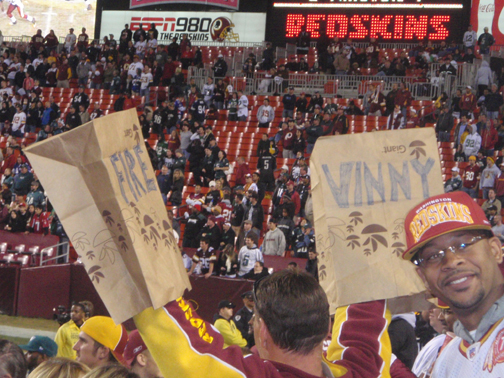 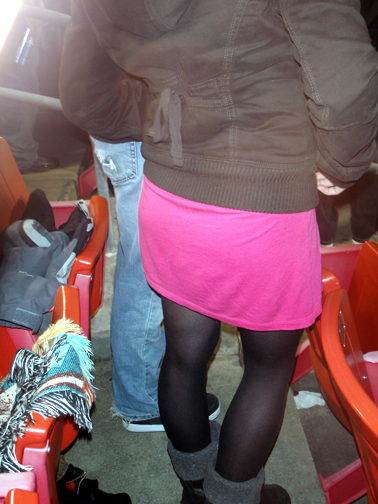 This person wore a skirt to a football game.Â  She kept sending her boyfriend to buy her cups of hot chocolate to keep warm. Because that made more sense than pants. (Shaking my head…)

Super excited that I’m also going to the Eagles/Giants game in Philly on Sunday. Praying for good weather though the outlook isn’t so good. I don’t care though. I’m not gonna melt. Can’t wait! Bring on those G-Men!!!