BFF Angi enlisted the help of some of her best girlfriends to pick out a Halloween costume for her son, Roman (7 1/2 mos. old). We passed on an owl, an elephant and a pumpkin and finally settled on this adorable number below. 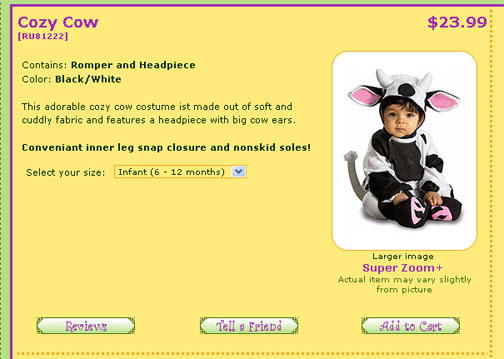 Angi’s husband wasn’t too keen on having the baby dressed in such a cutesie costume. He suggested we try and find him a more manly costume — like Robocop or something. My response of course was that we’d probably have a difficult time finding a Robocop costume for the baby because he’s way too little… AND because it’s not 1988.

Roman was scheduled to attend the Pumpkin Patch Party* at their church (*more on this later). So Angi got him dressed and he was adorable as usual. Please see below: 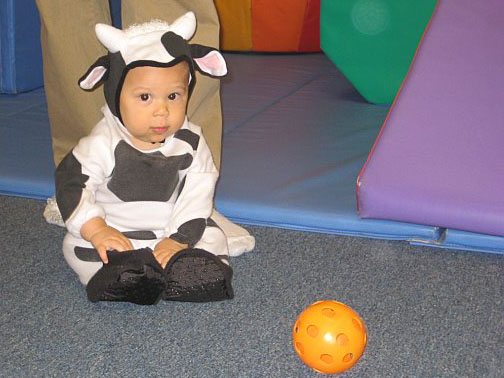 I know, right… We all thought he looked adorable but I’m pretty sure he’s going to hate us for this in like 10-12 years. Now I wasn’t there, but I imagine this next photo was taken after Daddy explained that Mommy and her friends would be showing these pictures to his future wife one day. 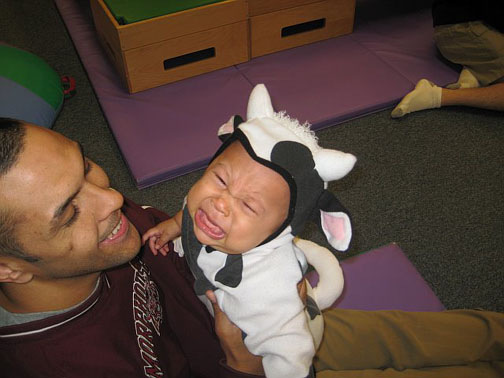 Yeah, Romie… your mom and all your aunties are haters.

Now moving on to the occasion for which Roman got all gussied up… the Pumpkin Patch Party. I didn’t inquire a whole lot about it, but that’s because I didn’t need to. Having grown up in a Baptist church where a lot of folks weren’t too keen on celebrating Halloween because it was Satan’s holiday or something or other, blah, blah, blah… I attended plenty of non-Halloween Halloween events as a child. They always called them Pumpkin Patch parties or Fall Fiestas or some other lame title that didn’t include the word ‘Halloween.’ The church I grew up in had a spaghetti dinner that all the children were invited to. Most of the kids would come dressed in costumes anyway (their parents totally missing the point) and then they would feed us spaghetti and give us candy. My thoughts… how bout we “ix-nay” the pasta and y’all let us hit the streets and get our own damn candy. I’m just saying…

My dad was an active non-participant in Halloween when I was growing up. We never gave out candy. And I remember I would peek out of my window at all the kids outside trick-or-treating and be so jealous. And he’d be like, “Get away from that window.” What’s more, he would have us turn off all the lights and put a sign on the front door that said “No trick or treat.” Yeah, we were “that family.” I swear it was like living in the Negro version of the Anne Frank House or something… Exhale.

My friend Gwen and her husband dressed their dog Blue up as the Incredible Hulk. 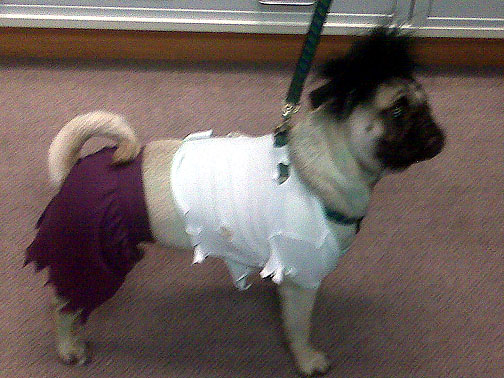 They dyed him green (he was a lot greener but this is after a bath), made a doggie wig for him and cut up a shirt and some shorts to make it look like he was busting out of them. Sooooo funny, right?… But when you really stop and think about this, don’t you kinda wanna report them to Doggie DYFS — if there is such a thing? Tee hee ;)

Here’s Blue from another angle: 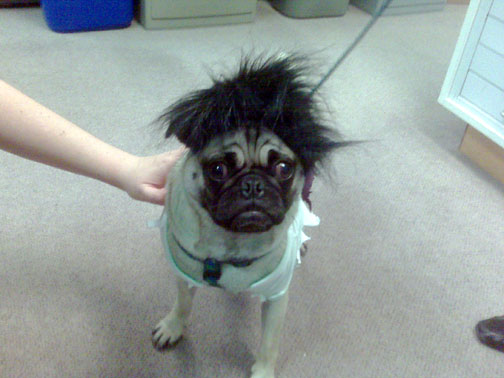 I don’t know if dogs come equipped with the capacity to experience shame and/or regret. But if they do, poor Blue’s gonna have a super duper helping ;) Maybe when Roman grows up and sees the photos of him in his cow suit, we can show him this photo of Blue and say, “At least we didn’t cut up your onesie and make you wear a mini Don King wig.”

Hahaha… I was invited to a few costume parties this year, but for whatever reason I just couldn’t get into it. Maybe next year I’ll actually try and go to one — but I’ll be sure to thoroughly think out the costume.

I don’t want to do anything I’ll regret.

2 thoughts on “Pumpkin patch parties, The Incredible Hulk, and regret”