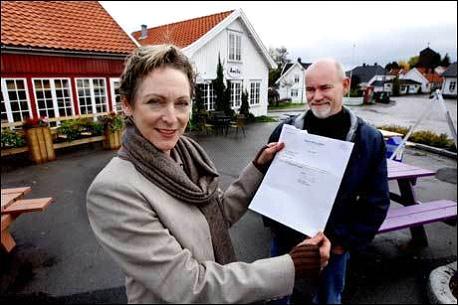 photo courtesy of: The Ladner Report

Hey y’all, my mom just forwarded me this post yesterday so it’s obviously been floating around since at least the beginning of the month and I’m probably hecka late, but I feel like it’s a story worth forwarding — especially when there are so many baseless, negative e-mails about Senator Obama floating around…

Here’s the synopsis: About 20 years ago, there was a young newlywed at an airport on her way to meet her new husband who had flown to their new home in Norway ahead of her. When she got to the counter she was told she’d have to pay a $100 fee in order to bring her second bag on board. She had noÂ money and no one to call for help. But the man standing behind her in line offered to pay for her bag so she could bring all her belongings with herÂ on her trip.

And thatÂ kind gentleman was none other than Barack Obama. 20 years ago when he was a student and wasn’t earning much money and $100 was nothing to scoff at (it still isn’t as far as I’m concerned), when he wasn’t running for anything… he was a just a decent youngÂ man who did an extraordinarily kind thing for a stranger. A thing he didn’t even remember he did until being reminded of it by the young woman’s parents decades later.

Just as important as his knowledge of foreign affairs and the economy,Â his eloquence and intelligence –Â the brilliance with which he’s managed hisÂ campaign, is the fact that Barack Obama isÂ a good guy when no one is watching.

“They” say that’s the true measure of a man’s character.

Read the story hereÂ and vote early if you can.

This man is the real deal.

One thought on “Who you are when no one is looking”