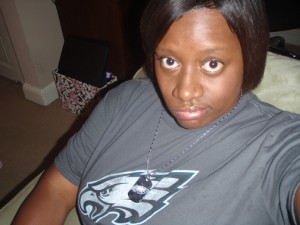 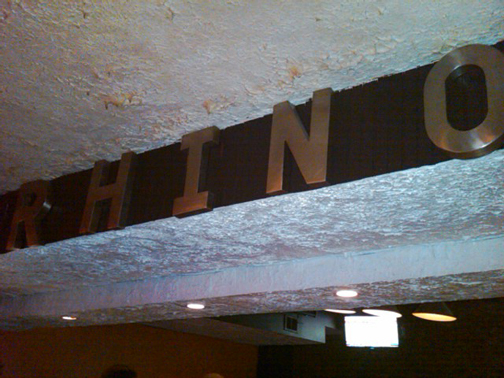 I brought my friend and neighbor Toiya with me. She’s a Dallas fan and I explained to her that she’d be walking into the belly of the beast, but she still wanted to go, so of course I obliged. It was like bringing my own little mini-game to the game ;) 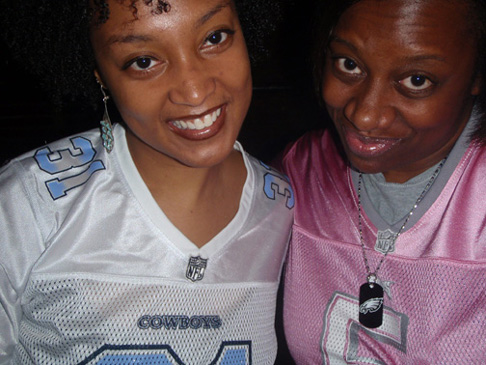 Me and Toiya before things got ugly

The woman sitting next to me at the bar was drinking her beer with a straw. After a few swigs, I couldn’t take it. There was a small group of us around her (men and women) who were just staring at her, and before long we decided she needed an intervention. Come, come girlfriend… 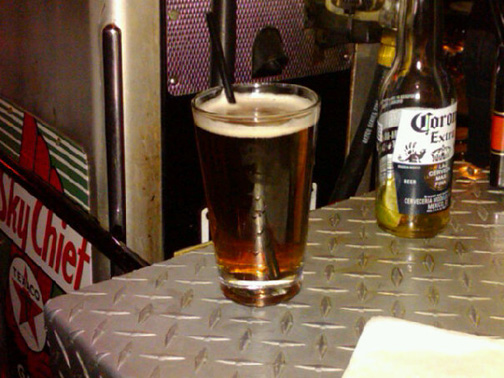 As a woman who loves both football and Yuengling I tried to explain to her that her actions were a poor reflection of ‘our kind’ and would only serve to further the stereotype that women don’t take sports — or beer — seriously. She didn’t surrender completely, but she agreed to use a smaller straw — more like a cocktail straw — which actually made the whole thing worse… But I watch A&E and I’ve learned that sometimes it takes 2, 3, maybe even 4 or 5 times to get thru to someone that needs help.

If I see her there next week I will try again. Because I care about people. 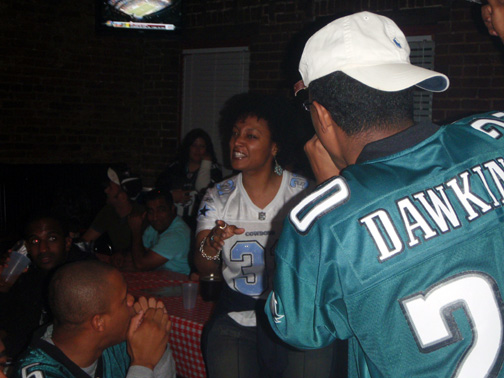 The game was close, and when the Eagles were up, Toiya did the unthinkable and dove into the belly of the beast. She wanted me to take a photo for posterity, but I warned her it wasn’t a good idea and that I couldn’t protect her…

They started booing her very presence in the building. It was becoming clear she was going to have to fight her way out. 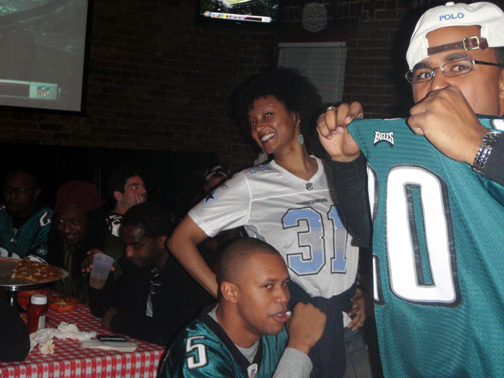 Undeterred, she began to pose. Then the mob began to turn on me… Who was I to bring this infiltrator into the inner sanctum??? Pretty sure dude at the bottom of the photo is giving me the evil eye just for being friends with Toiya.

It was a tight game, as everyone thought it would be. I actually didn’t talk any smack this week b/c I knew Dallas would bring it. The refs blew some really big calls, but in the end we got beaten. No excuses. Dallas is sitting on top of the division but at least NY lost again too. Next week we’re at San Diego, which is gonna be tough. But I believe we can do it. NY only lost to them by a point — and we all know what a mediocre team they are this year ;)