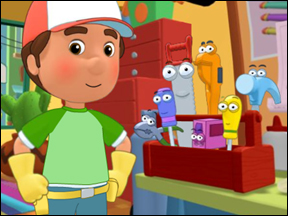 OK, I know I’m gonna get some comments from you parents out there about how this isn’t new… yada, yada, yada… but I don’t have kids, so I’m allowed to be a bit behind the curve.

Handy Manny? Really? My very pregnant friend Angi is cramming and learning about all things baby in preparation for her new bundle and she brought this cartoon to my attention. I realize my tardiness in learning about this show means I’ve probably missed whatever backlash–if any–surrounded this cartoon when it first began. And I’m sure it’s educational and the kids love it because it’s from Disney, but I gotta assume that there were at least a few Latinos who weren’t too happy about a Latino handyman cartoon.

Talk about perpetuating a stereotype. Why aren’t there marches going on right now? I know damn well if Disney or whoever else came up with a young black girl cartoon and named her something like… I dunno Preg Nancy, we’d be marching, well… until.