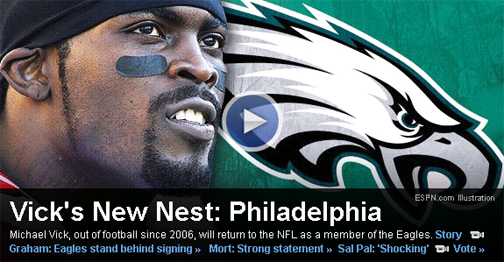 Now this was unexpected.

In principle I’ve been totally for Michael Vick getting the chance to play in the NFL again. I think he got a raw deal on his jail sentence, and I believe he should have the opportunity to get his life back. But I gotta admit, that I never in a million years thought he would land in Philly. I’m not sure how I feel about it yet. Lurie, Reid, and the boys have made some smart (albeit hard to swallow) decisions during the offseason and so I hope know they have a plan here. I’m just having a tough time seeing it just yet.

The pros as I see them so far are: 1) Having Vick as an option could help to keep McNabb on his toes. Clearly they didn’t bring him in to take over the starting QB spot, but having a waaaay-more-than-viable second string QB (provided he’s able to get back into his pre-prison conditioning/form) forces Donovan to make sure his game is as tight as possible… As much as Eagle fans love to boo McNabb’s mental lapses, we never really want to see Kolb or Feeley — or whoever the other guy is — take the field. A little fire under the ass is a good thing. 2) Vick’s athleticism lends itself to all kinds of interesting and creative looks on offense. We lost our best all-purpose defensive player in Dawkins but now we’ve got a guy that can realistically jump into any number of offensive sets and make it work. I’ve often been critical of Andy Reid’s play calling. So this should be interesting.

I’m sure there are more pros that I’ll come to recognize in the coming weeks, but I guess my biggest concern is that maybe we were already OK and now we’re forcing it. Michael Vick isn’t an egomaniac and I’m sure he appreciates the opportunity and accepts what his role will be, but I’m just scared that when certain egos get involved and chests start to puff out, we’ll end up like those LA Lakers teams in the early 2000’s where they stacked the roster with superstars but couldn’t get it together. McNabb says he’s not worried about his spot and that he lobbied to get Vick to Philly — which I’m sure is all true now, but…

Exhale. Time will tell. I’ll reserve judgement for later and in the meantime just put a little faith in the front office. (Haha who said that? ;) Well, that’s all for now. But I’ll be checking out this 11am presser for sure.