So I tripped up to NYC yesterday for an audition at good ‘ole Gotham. Treated myself to the train (only one way of course, I took the bus back). Had a pretty good nite. When I got to the club I went down into the smaller lounge showroom in the basement to clear my head and run thru my set a few more times… I was casually chatting with the owner of the club and a booker/producer friend I hadn’t seen in almost two years when in walks one Mr. Louis Ramey — one of my absolutest favoritest people!

We met formally during this season of Last Comic, and were looking forward to clowning together for longer than the semifinal week we spent in Vegas, but the comedy gods had other plans. They sent me packing and he made it to the top five ;) But we’ve kept in touch and just thinking about some of the things he says off stage send me into spontaneous laughing fits ;)

Anyway, he saw me first. And when I looked up and our eyes met, it was like the scene at the end of The Color Purple when Nettie comes back to the farm with Celie’s kids and they’re reunited… 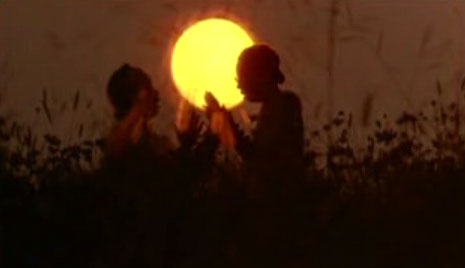 We even played the same hand game. You think I’m kidding. But every Black person in this country knows the words: “Me and you us never part. Makidada. Me and you us have one heart. Makidada.” We did this. Repeatedly throughout the nite. I heart Louis. The other day I left a comment on his Myspace page asking him for a dollar. When I saw him last nite he handed me four quarters. What a guy! ;)

My show was at 8:30 in the main room and there were some great comics on the showcase: Mike Birbiglia, Arj Barker, Baron Vaughn, Nate Bargatze (one of my personal faves ;). I met a comic out of Boston called Joe Wong who had this hilarious bit about the test to become a US citizen. He’s a Chinese immigrant and he says one of the questions on the test was “Who is Benjamin Franklin?” His answer: The reason our convenience store got robbed. And then another question was “What is the second amendment?” His answer: The reason our convenience store got robbed. Or something similar to that. It was hilarious. I heart him too now.

I won’t bother you with the rest of the details of the nite, except to tell you that my 1:45 am bus didn’t leave until after 2:30 am. I got home at 7:15 and had to hop in the shower and be out the door again by 8:00. Exhale. I was dragging this morning, but as I was coming out of the Metro there was someone there blowing bubbles. There were bubbles everywhere and I immediately felt better. I don’t know what it is about bubbles but they take me back to an innocent time where I was completely carefree. I tried to catch the bubbles. I forgot that I was 30. ;)

I think I’m gonna buy some bubbles to keep around the house. I already have bubble wrap stashed in my hall closet. I pop it when I’m upset. It calms me down ;) Maybe anything that contains the world bubble is a good mood alterer for me. Maybe I should see a shrink. Perhaps I should buy some bubble gum. I’m so sleepy. I’m sorry you had to read this.