IÂ know IÂ was supposed to find out when the Bob and Tom episode aired so that anyone interested could watch, but I was a loser and I didn’t. However, my friend Herbie managed to catch it and tape it for me and I Youtubed it for y’all! Doing Bob and Tom is always fun.Â If you’re not in one of their radio markets,Â check out their podcast or watch them weeknights at midnite on WGN if you get that channel. 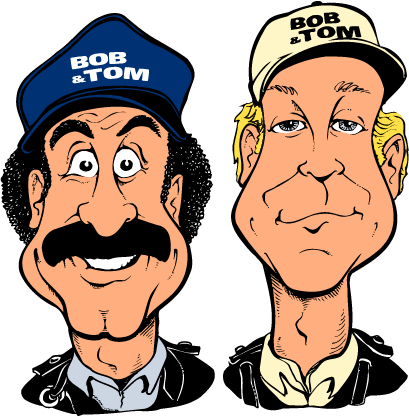 Hey y’all, If you’re in a Bob & Tom radio market, tune in during tomorrow morning’s show. I’ll be on with Bob, Tom, Chick & Kristi for big fun. I’ll have to dig up the clips from the last time I did the show and post them. We had a ball. I made Tom spit tea thru his nose. Of course it’s radio so you can’t see that. But you can totally hear it. ;)

The cool thing now is that they videotape and air the Bob & Tom shows on TV on WGN each nite at midnite. I’m not sure if shows air the same nite or the next nite or what… but I’ll let you know what my sleuthing uncovers so we can all tune in. I’m definitely not complaining… but radio was the last bastion of “it-doesn’t-matter-what-you-look-like-ness” in the world of entertainment. Now you gotta actually brush your hair and look presentable for radio. What is the world coming to? ;)