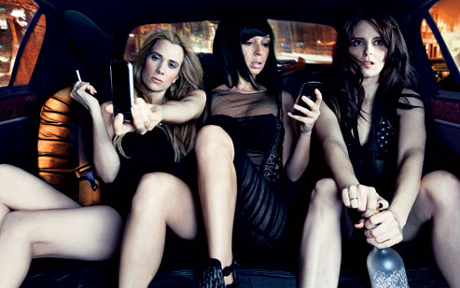 …is the title of an article in the April issue of Vanity Fair. It’s a retort of sorts to Christopher Hitchens’ 2007 article entitled “Why Women Aren’t Funny”–which I blogged about last winter. Take some time out and read the entire article(s) for yourself… but in the meantime, I’ve posted some of the quotes I found most interesting below:

“Women either had to compete head-on, in the aggressive style of Paula Poundstone or Lisa Lampanelli or subvert the form and make themselves offbeat and likable, the way that Whoopi Goldberg and Ellen DeGeneres do. As Elaine May used to say regarding improv, “When in doubt, seduce.” By and large, however, stand-up comedy is tougher and meaner, and the women who do it play by men’s rules.”

“It used to be that women were not funny. Then they couldn’t be funny if they were pretty. Now a female comedian has to be pretty — even sexy — to get a laugh.”

“It has become a supply-and-demand issue: the supply of good-looking female comedians is growing, and the industry demands that they keep growing prettier. Chelsea Handler, the host of Chelsea Lately, a talk show on E!, has long legs, short skirts, low-cut shirts, and puffy blond hair; her look is Beverly Hills bimbo, with a Borscht Belt mouth.”

While this new article is initially positioned as a rebuttal to Hitchens’ widely criticized claims–1) that women aren’t as funny as men because human nature and society don’t require us to be, and 2) that those who are funny are all overweight, gay, unattractive or Jewish (WHAT?)–it falls waaaay short. In fact, it does little to nothing to address the first point and then somehow morphs into an article about how attractive you now have to be in order to be a successful female comedian.

The author cites Tina Fey’s career as an actor, writer, director and producer as evidence that today’s female comedian can stand toe to toe with her male counterparts. But then by focusing on how attractive she is–or how unattractive she isn’t, I feel like the author is almost discounting her success. Did Tina Fey’s looks help her get the job of head writer of SNL? How the heck should I know? (Note: by her own admission, Fey doesn’t consider herself as ‘a looker’) But I do know that she couldn’t have kept the job, written a hit movie, and created 30 Rock if she didn’t have a brilliant comedic gift. That’s what we should be talking about.

I feel like I was duped by Vanity Fair. Am I missing the part of the article where I’m supposed to feel empowered–spoken up for? Or was that even the point? I may have disagreed with Hitchens but in my opinion, he wins this battle because in certain parts of the ‘rebuttal’ article it seems like the author is agreeing with him… or at least just not disagreeing enough. Pretty photos? Yes. But this is no rebuttal.