Another gem courtesy of Passiveaggressivenotes.com. Enjoy the read. 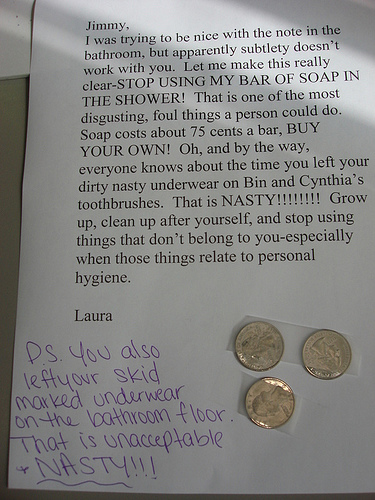 My favorite part is the .75 cents taped to the letter. But then also I feel the need to point out that a niceÂ bottle of shower gelÂ could solve this whole problem. I mean who uses bar soap in 2008?

Oh… Well, I didn’t know that. OK, then also let me say that clean soap wouldn’t be as much of an issue if you used a washcloth. I mean I’m assuming that’s not the case in this instance, and I don’t want to make this a racial issue or bring up old stuff… butÂ I still don’t understand the ‘no washcloth’ thing. Martha Stewart makes them. I know White folks are buying them…

The underwear on the toothbrushes is inappropriate. So I feelÂ Laura on that. I say kick Jimmy get a new roommate. Dude is a pig-dog.