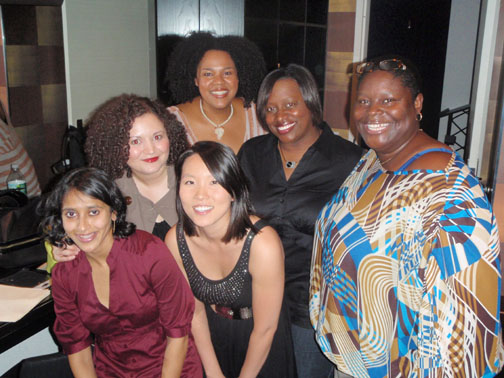 Headlining the Hysterical Festival’s Ambiguously Brown Comedy Hour show was Retta, who I’ve been a huge fan of for years. I hadn’t been doing comedy long when I saw her Comedy Central Presents a few years ago. But I remember thinking, “If she has a special on Comedy Central, there is a place for me in this industry.” Really. She’s super smart — a lot more of a storyteller than just a set-up/punch kind of comic and just laugh out loud hilarious. Heart her ;) Jiwon Lee was the only other comic I didn’t know prior to the show and she is hysterical. Check her out. Aparna and Diana are my DC homies, although D defected to NYC about a year ago ;( I wish I could have stayed for the entire festival. But from the looks of things Desiree and her team did an awesome job! Sisterly love. It’s a beautiful thing ;) Can’t wait til next year.

Hey y’all! So next Thursday 10/16 I’ll be back in NYC to perform as part of The Hysterical Festival. It’s an all-female comedy festival featuring stand-up, sketch, cabaret, film screenings… all by some of the most hilarious women in the business. The show I’m on is called “Ambiguously Brown Comedy Hour“ and it’s gonna be at Comix. It’s gonna be an awesome show and I’ll be performing with some amazing comics you’ve seen and heard all over TV and radio (Retta, Jiwon Lee, Diana Saez, Aparna Nancherla, Desiree Burch) — aaaahhh the sisterly love ;)

If you’re in NYC, come on out! Here are the deets: