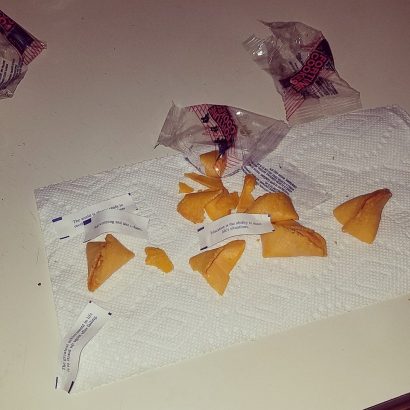 Just smashing fortune cookies, trying to find one that reinforces my life choices… (1/3) 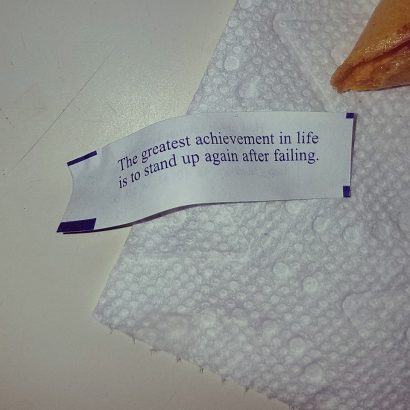 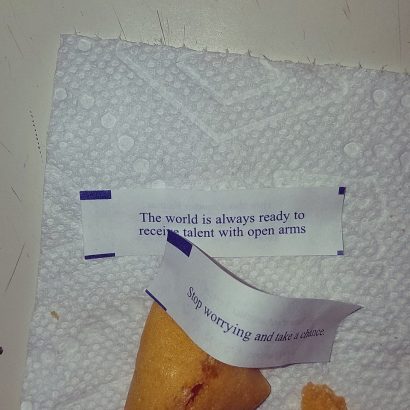 Ha! I knew there would be one about talent. You better receive me, world! (3/3)

Don’t judge me; this is how God speaks to me. 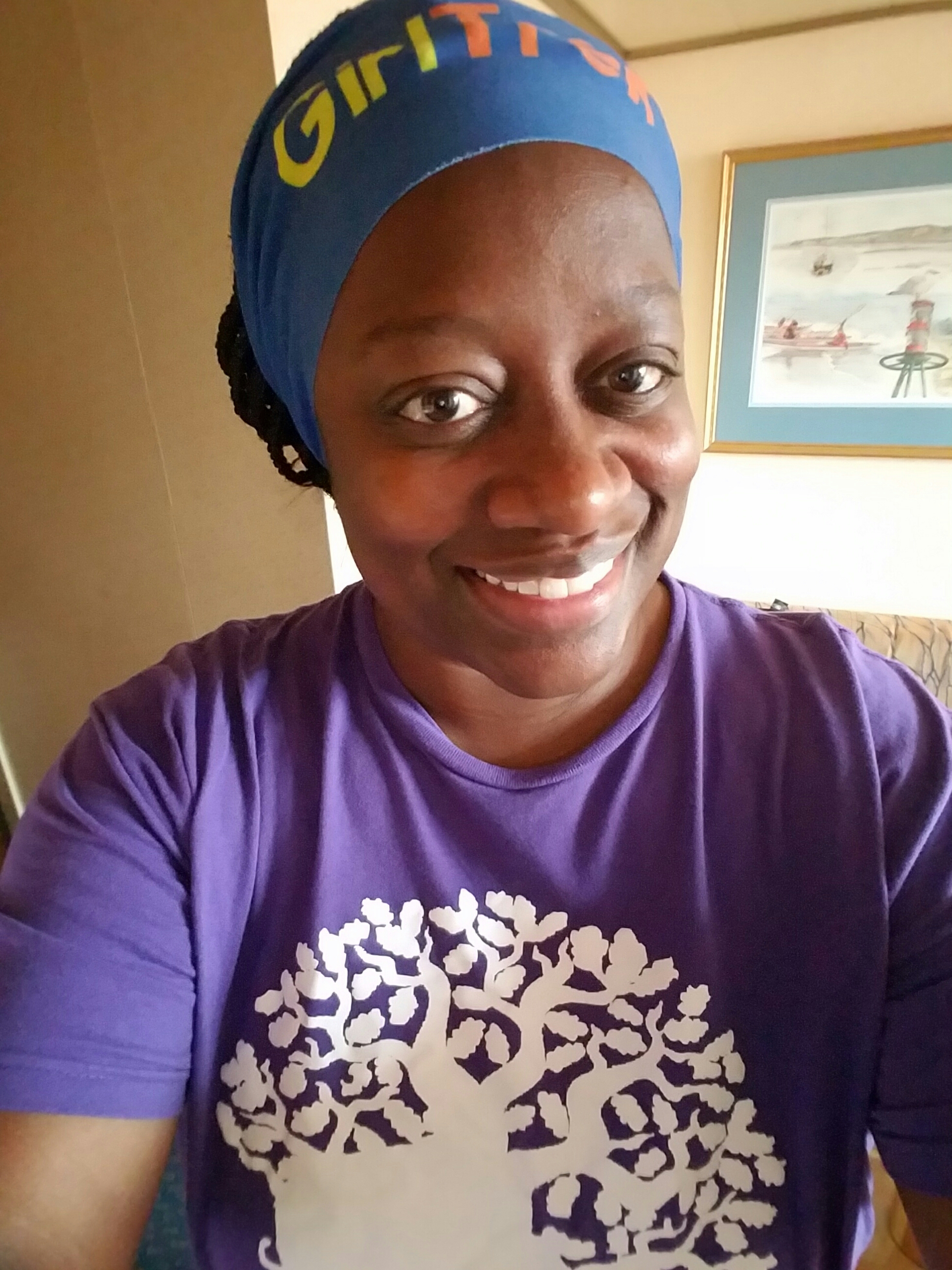 I still plan on getting my #GirlTrek on while I’m on this ship. I will work out at least 5 days a week. No excuses. I expect all 3 of y’all regular readers to hold me accountable. Saturday, I even invited 1,800 people to carb-shame me in the dining rooms if they catch me slipping on my eating plan. Even if they’re not gonna do it, it’s keeping me in line. Wish me luck on #OperationLoseWeightOnACruiseShip #ImGoingToAWeddingTheDayAfterIGetHome 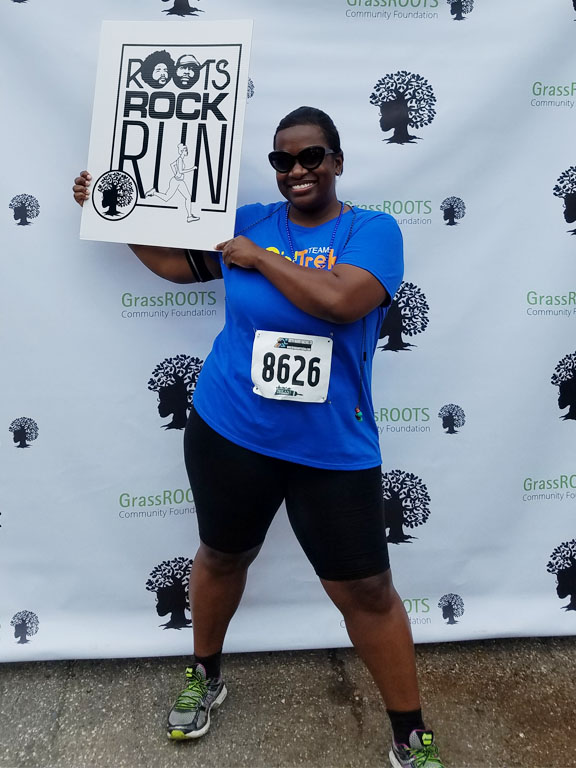 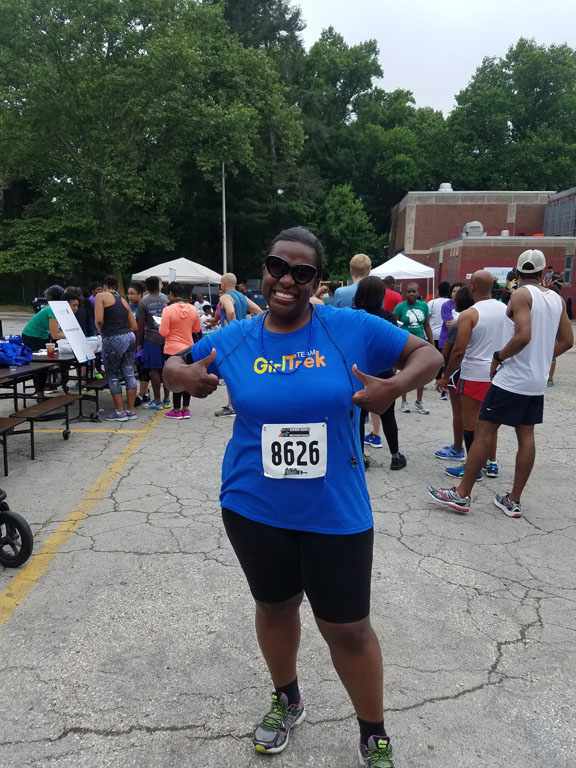 This past Saturday I ran my very first 5k—the Roots Rock Run in Philadelphia. I did it with my sistren from GirlTrek, an amazing black-women’s wellness organization I joined a few months ago. My goals were 1) to run more than half of the race and 2) not to come in last. I succeeded at both! Who knew 171st place could feel so good? I ran at an 11-minute/mile pace and finished in 34:57, which I think is pretty good for a newbie. And I really enjoyed myself; I think I get why people enjoy racing. I wasn’t exhausted afterwards because I’ve been walking and jogging five times a week for the past couple months. I was super proud of me!

Oooh and also, because it was hosted by The Roots, I got to run behind, meet, and selfie with Black Thought—my forever crush and one of the greatest emcees in the game. I’d always imagined I’d be slightly less sweaty during our first meeting, but reality rarely lives up to expectations. 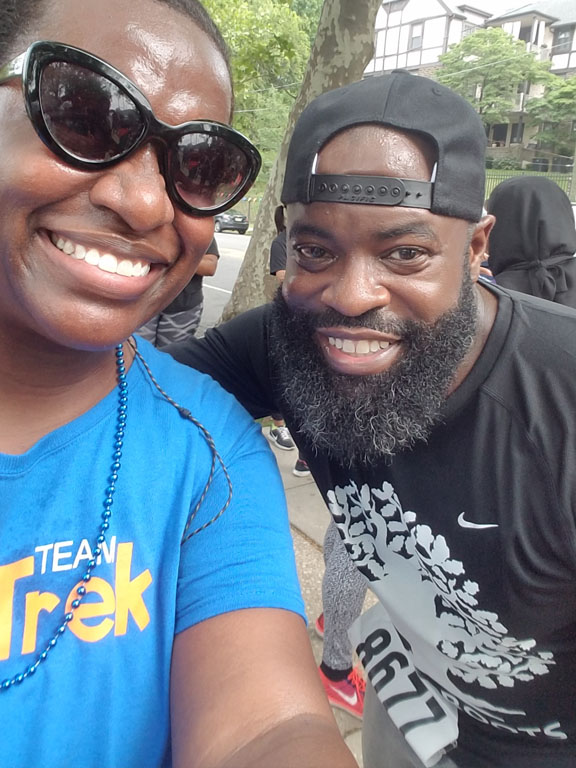 Me with Black Thought. #Swoon 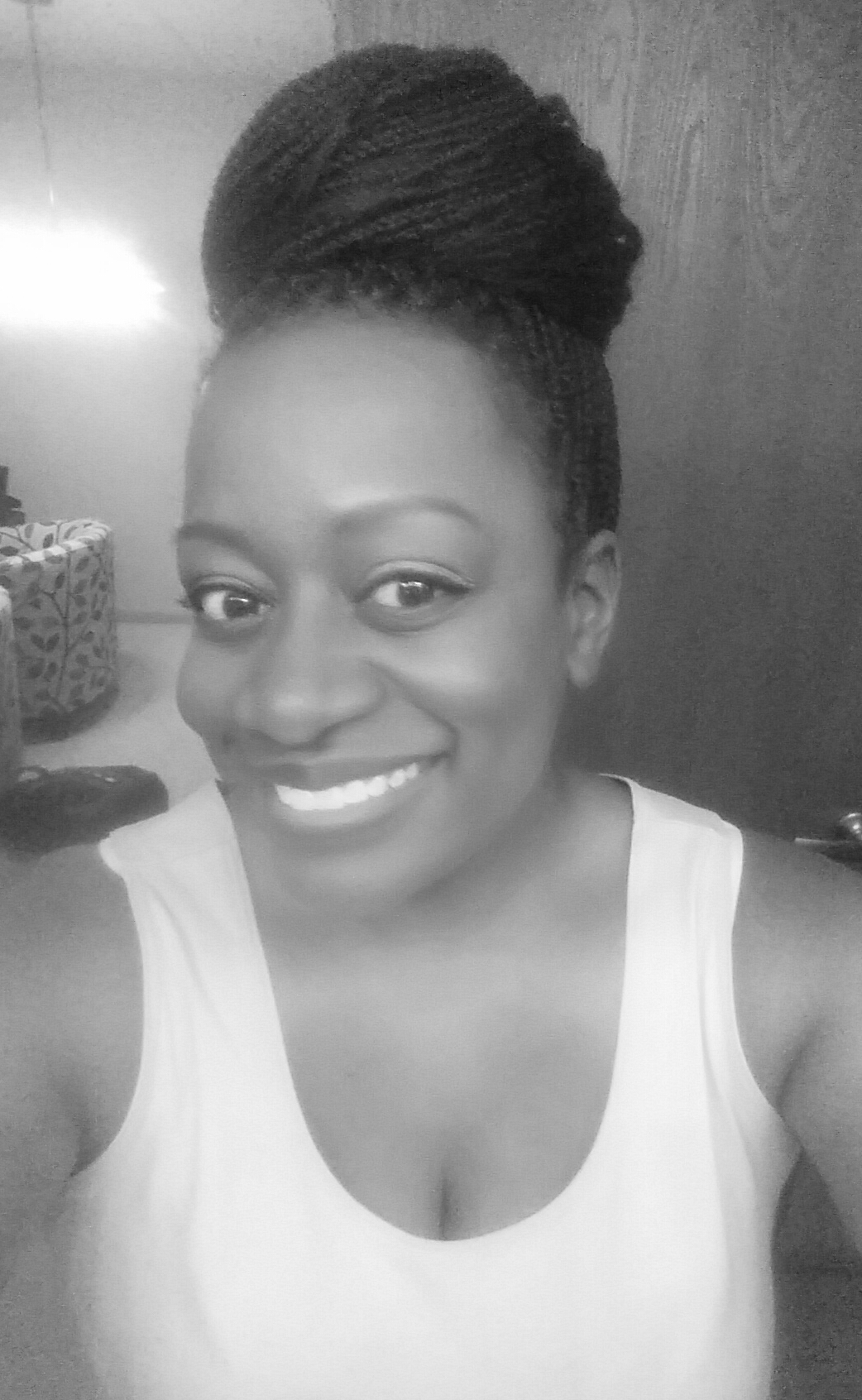 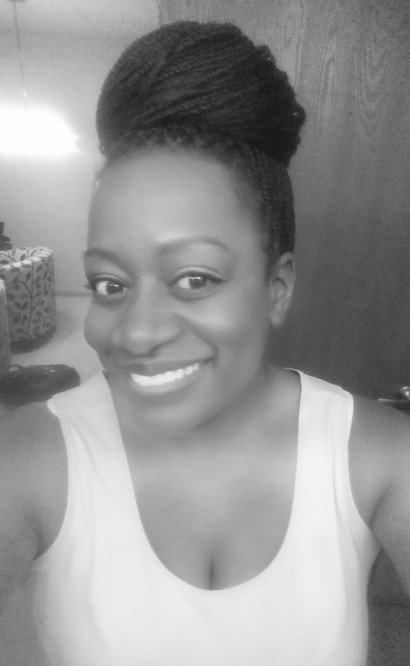 That’s what the nice [not black] lady behind the counter at the bookstore said to me last nite. She said it with a smile, so I know it was a compliment; she just didn’t know how to make it compliment all the way…

I cut off most of my hair. Most people who know me know my hair is my thing. But when I was really suffering with my Graves Disease, my hair broke off and fell out like crazy. It happened so quickly; one day I had a head full of healthy, shoulder-length hair, and the next day it looked like I got mugged for it:

“Gimme that ponytail or eat this bullet, lady! Your choice.”

It was traumatic. But I knew I had to let the rest of it go. My medication was adjusted, and along with it, my thyroid hormone levels, so I’m feeling pretty confident that after cutting off all the damage, my hair will rebound. But I am not happy with my current length. I wore a (modest) weave for the Exhale taping; it was the length my real hair had been. But the day after we wrapped, while I was still in LA, I found a braiding shop and had these box braids installed. This isn’t the first time I’ve worn braids, but it is the first time I’ve worn them for longer than two weeks. And you know what, they’re really growing on me. People keep complimenting them, or almost complimenting them (see above), and I’ve always thought natural hairstyles were beautiful. My mom wears a TWA (teeny, weeny afro) and the majority of my girlfriends have moved in that direction. I’ve often thought my natural curl pattern would look great if I allowed it to reveal itself. It’s the “going” natural part, the transition, that’s always seemed daunting. I’m impatient. But this disease has been a constant test of/lesson in patience. For the better part of 2014, I couldn’t stand from sitting without assistance, or walk up a flight of stairs. And now, as I am enjoying the get-up-and-go ease of these braids, and I find myself stuck in between a rock and a bald place, I’m thinking that maybe there’s no time like the present to put to use my newfound life skill.

My mom is not convinced… 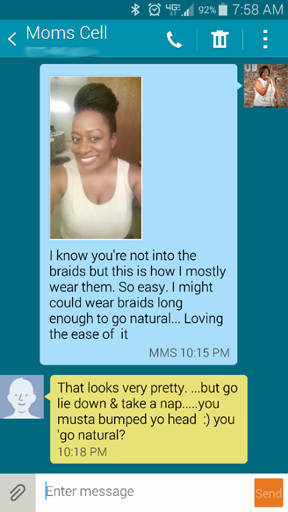 So, we’ll see. Maybe this is the beginning of a natural hair journey. Maybe it’s a holding pattern. But I’m not going to make a decision either way anytime soon. Relaxers aren’t going anywhere so no need to rush back to them. And I would love to prove myself and my mom wrong.

I joined a Planet Fitness at the top of the year. Because if you’re gonna join a gym, you should join one with free pizza nites, bagel days, and unlimited Tootsie Rolls. And despite its best efforts to sabotage me, I’ve lost 30 pounds so far. Yet on most days I still have to trick myself into going to workout. I’ll put my gym clothes on early in the morning and tell myself, “You wouldn’t dare take those clothes off without going…”

But I would. I would dare.

And when I do go, I still manage to procrastinate all day long. It’s amazing how everything on my “to-do” list becomes urgent when the alternative is working out:

I just ate lunch. I should probably let the meal settle.

“I just wanna look like my headshots again” IS TOO a legitimate fitness goal. 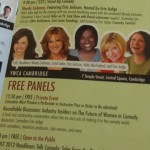 This morning I was talking to a good friend who is turning in her letter of resignation today from her cushy corporate job where she travels all over the world, to pursue self employment and follow her dreams. HOORAY FOR THAT!!! She hadn’t presented her letter to her bosses yet and I guess she just wanted to talk it out one last time with someone who had been thru what she was about to go thru. I was flattered that she thought to call me, but at the same time I was thinking, “I am the last person anyone should be calling for advice or consult on how to prepare for leaving your job.” I mean sure I did it. But I certainly didn’t do it the ‘right’ way.

I had plans to do things differently. I put a huge cash down payment into my condo and planned on refinancing and cashing out to give myself a nice cushion when I left my job. But just as I was about to quit, the market crashed. I lost nearly half of the money in my 401-K and the value of my home plummeted. But I knew I couldn’t stand to work my day job one more day so I went on with my plans, got what I could out of the house and prayed real hard. And it’s definitely been a struggle. Some months are great while others are almost completely dry and I often feel like the most irresponsible person in the world. I had all the things I was taught adults were supposed to have — a good job, a home, retirement savings — but I wasn’t happy. So I took a leap and have (Praise God) found a way to make it every month. Sometimes I have to ask for help. Sometimes I have to work temp jobs. And I’ve had to learn to say ‘no’ to lots of things. But the one thing I’ve learned in life that’s carried me through thus far is that there is no such thing as the perfect time.

No perfect time to quit your job. No perfect time to get married and begin a family. No one right way or perfect time to do anything in life. The best you can do is pray to whomever you pray to for guidance, make smart decisions and work hard. As my friend reminded me (and remember I was the one that was supposed to be helping her) in this market and especially after Madoff and the Wall Street collapse, etc. even tons of rich people woke up broke. Either of us could have been blind-sided and laid off with no other skills to fall back on… Thankfully that was not the case.

I wasn’t sure exactly where I was going with this when I started typing and even now I’m still not sure — but what I do know is that if I had never done what I did to pursue a career in comedy I’d be a lot less happy. I wouldn’t know so many awesome people, wouldn’t have been so many awesome places, and I’d probably have resented myself forever. I love my life. Even the hard parts that make me cry.

“It’s just money.” — That’s what my friend, the wise and extremely awesome Erin Foley always tells me. “Do you feel funny? Are you happy? Are you making progress with the act and with bookers? If so, then remember the rest is just money.” Easier said, I know. But it’s so, so true. And since the time for whatever you may wanna do is probably never gonna be right — Why. Not. Now?