So I just received the photo below via e-mail from someone whose friend took the photo at a Palin rally this morning.

I wanted to be angry, but I totally couldn’t ;) Because even though — in my opinion — the message and intent of this sign are potentially inflammatory and completely at odds with what I believe to be true, I cannot deny that it made me chuckle. 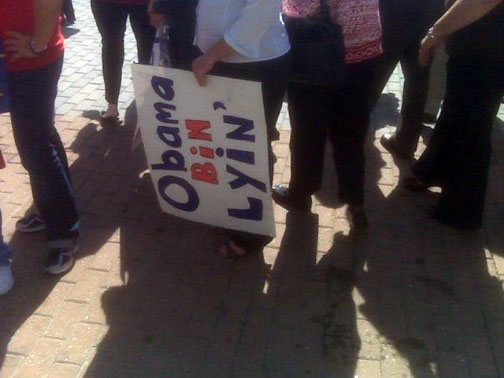 During the 2000 presidential election fiasco when I worked for CNN, we would set up camp each morning in front of the Supreme Court waiting for a decision and recording the daily protests and the loonies that participated in them. If I had a scanner, I’d post some of those photos for y’all. OH THE COSTUMES! One woman came out every day with her toddler covered in three-hole-punch paper — he was a dimpled chad. Another guy dressed up as “The Gore-inch who tried to steal the election” — complete with full-on green body paint. I am so serious… Although I was on the other side of the argument I couldn’t help but laugh at some of the stuff they came up with.

Funny is funny. And as a comic, I cannot hate.