I was watching the “Today” Show yesterday and Meredith Vieira was broadcasting live from Ireland. And she began her piece by saying that “some 35 million Americans claim Irish heritage, and that is very impressive, given the fact that here in Ireland there are only 4 million people.”

Visit msnbc.com for Breaking News, World News, and News about the Economy

And I dunno, maybe I’m just overanalyzing, as I tend to do — but it sounded so conspiratorial?… “35 million Americans claim Irish heritage” … I swear at the end of the sentence I halfway expected her to be raising one of her eyebrows and giving one of those “we’ll see about that” nods to the camera.

Exhale… Maybe it’s because I grew up as a mini news junkie who had complete faith in the integrity of the news media, but as an adult saw firsthand how badly the news can be manipulated and how non-news is touted as the real thing that I’m completely cynical and suspicious of everything. Honestly, the Meredith Vieira thing was literally something that made me chuckle — the idea of people ‘passing for Irish.’ ;) Hahaha! As a comic I read a lot into things that aren’t there looking for the funny, but something about it jogged a whole bunch of memories I haven’t thought about in years like:

I was still working at CNN Washington during the 2000 election season. And in addition to awaiting Supreme Court decisions, covering the daily protests and camping out in the freezing cold to get a glimpse of the Cuban grandmas and find out whether Elian was gonna have to go back home, it was CNN’s 20th anniversary. And each bureau was commissioned to do a retrospective of the biggest news stories their organization covered over the years. I was on the research team so I spent my days pulling tape of all kinds of stuff — Bernie Shaw in Iraq, the Clinton scandal(s), etc. And I remember one day in the editing booth the producer refused to use some tape I pulled on the Million Man March because he was Jewish and was offended by Farrakhan’s anti-semetic views. There was some back and forth between the folks in the room about how despite his political views the March was a huge story, but the producer wouldn’t budge. And I remember thinking, “Really? What does and doesn’t make it onto the air can be decided by one spoiled producer who wants to huff and puff because Louis Farrakhan hurt his feelings?” And this is supposed to be NEWS?!?

In the end, the Million Man March did make the piece but without a single image of Louis Farrakhan, which if you were just watching it might not have stood out to you. But knowing the background, that has always stayed with me. I respect CNN as a pioneer in the cable news field. But ever since I left there, I’ve had a sour taste in my mouth. I’m still a news hound but I view it in a completely different light. I don’t watch CNN at all. I watch MSNBC almost exclusively, which at first may seem completely contradictory to everything I’ve just complained about. But the way I see it, if all news is corrupt and biased then why not just choose the network with the personalities I enjoy the most. I watch Joe Scarborough and Mika every morning. And as a comic (and huge sports fan) how can I not choose Keith Olbermann, Chris Matthews, and Rachel Maddow over whoever-the-hell-else is on the other networks? ;)

And don’t even get me started on newspapers… 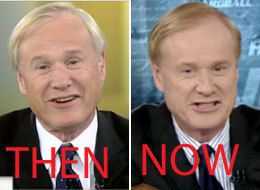