Me and my two girlfriends Angi and Jennifer were walking around the inner harbor in Baltimore this weekend before the Stevie Wonder show — yes the ticket man did come thru and yes it was the best show I’ve ever been to ever, forever… but more about that later…

This dude was walking back and forth along the pier yelling “T-1-shur, T-1-shur” over and over. My girls had no idea what dude was talking about, but after like the second or third time he said it, I realized old boy was selling:

Bootleg souvenir t-shirts is what he was selling, but no one around us had a clue as to what he was talking about — and he wasÂ  pushing around a cart full of t-shirts. Yes, really. It may have been the worst rendition of the English language I’ve ever heard.

Below is a picture from the concert taken on a cell phone. I know its poor quality and you really can’t make out anything in it, but I promise you, it’s Stevie standing on top of a piano: 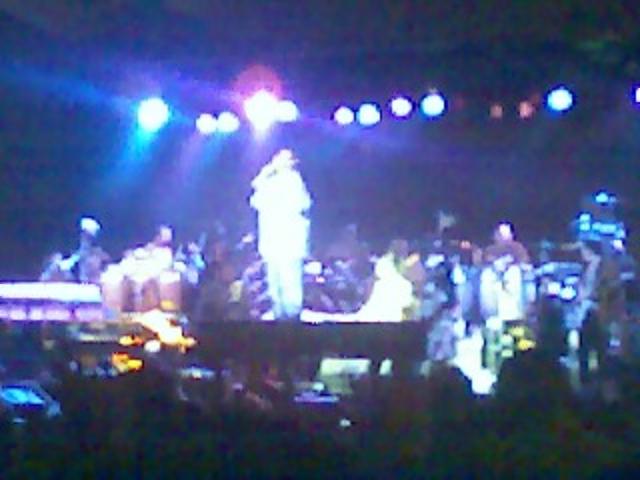 Anyone who knows me knows that seeing Stevie live has been a dream of mine forever. He hasn’t toured in over a decade and let me just say that I had the time of my life and I owe it all to…

Went to a luncheon this afternoon where Tim Russert was the featured speaker. It was awesome. I’m such a huge fan. I’m really tired. Good nite.