This past Wednesday I went back up to NYC for my Live at Gotham taping. Woo-hoo!!! We had to get in town the day before the taping just to make sure we were there and there were no problems. An extra free nite in a funky little NYC hotel? No complaints outta me. They put us up at the Maritime hotel. The hotel was in Chelsea and it was really cute. The rooms were a little small, but the space was gorgeous and they really went all the way with the cruise ship theme. Note the windows. I wish I had taken photos of my cabin/room and the shower. Then you’d really see what I meant.

Anyway, on Wednesday nite, the best friend Michelle who works in the city came by the hotel to evaluate outfit choices before we headed out to dinner. She picked the same outfit everyone else (including the wardrobe manager at Comedy Central) did. Of course it was my second choice, but ended up working well in the end. Then we went out to this Thai Restaurant a couple blocks away from the hotel. It was yummy. Good choice us! When were done eating, Mich had to hop the bus back to Hackensack and I had a show to get to.

My management had a benefit show going on that nite at Stand-Up NY, so me and the two other guys from the agency that were taping the show on Thursday –Nate Bargatze and Mike Vecchione — were on the show as a warm-up. Also on the show were Todd Barry, Rich Vos, Kevin Brennan and Jeff Ross. I was almost scared to talk to Jeff because I’ve seen him rip so many people to shreds at roasts, in my head I’m assuming he’s gonna start busting on me as soon as I introduce myself… Of course he didn’t and seemed like a really cool guy. Oh how I love NY.

On Thursday my show wasn’t until 9:30 but we had to be at the club by 4 to do paperwork and rehearsals and stuff. The host for my show was Jim Norton — YAY! I’d never met him before. We had to get makeup done and hair and stuff and then we all just waited in the makeshift greenroom in the basement. I watched the entire first show and there were some really funny folks. Also in the greenroom were managers, CC staff, and just other comics who came down to show support. I fell in love with Rich Vos and Bonnie McFarlane’s little girl. She’s like 7 or 8 months old. A beauty. Yes, I know I’m rambling.

I was up third in the second show. And when I got out there the crowd was hot. I could see my cousin Derrick and my friend Loren sitting right near the front — which wasn’t distracting at all (please read the sarcasm :) They’d asked us to take the mic off the stand and place the stand on the opposite side of my body than I’m used to. It felt so awkward to grab the mic with my left hand that it unsettled me a bit. During the first bit I consciously had to stop myself from shaking. But then I settled in and had what I think was a really great set. 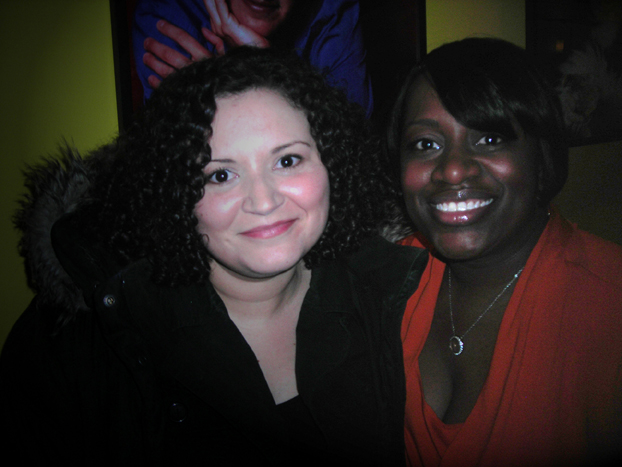 That’s me and the hilarious Diana Saez. She caught me coming off the stage and we took this fabulous photo. When I finally got back downstairs to the greenroom, the Jack and cokes started flowing. Then, pretty much everyone went to this bar a couple blocks away where the Jack and cokes continued to flow. After we were there for about an hour, me and my friend Jelani went to this diner in the meat packing district to get some food in our tummies. Then I hopped a cab back to the hotel and hung out some more in the lobby with some of the other comics. After about a half hour of that I knew I was done, so I went upstairs, packed, and passed out.

One thought on “Live at Gotham”