Sorry in advance for the epic. Eat some now, save some for later…

So, I went up to NY yesterday for what I guess you would call a ‘commercial shoot.’ It was a project for TBS where instead of having their corporate advertisers run 30-second commercials, they ask comics to write bits around the products and perform them in comedy club settings. I guess it’s a more subliminal type of advertising and the spots air primarily during the weeknight comedy block. Not sure if I did a good job of explaining this, so here’s one that cutie patootie Jeff Dye did last go-round:

That make sense? So our companies were Pop Tarts, Cici’s Pizza and I Can’t Believe It’s Not Butter. It was a challenge to write jokes that portray all these products in a completely positive light because my instinct as a comic is to poke fun at things, point out what’s bad or dumb about them…Â  Strangely, that doesn’t seem to work when you’re writing ads for a product. Imagine that. ;)

We shot in Brooklyn and I headed right back to DC as soon as I wrapped the shoot. I hate driving on bridges but in order to get home I had to drive the Verrazano and the Goethals. I was OK on the Verrazano… 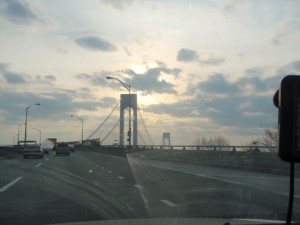 But that damn Goethals Bridge… OMG!!! It was smooth sailing leaving Brooklyn and all the way down the Jersey Pike, but as I’m merging onto 95 South after crossing the Delaware Memorial I hear a loud CRACK! I can tell whatever it was happened to my car, but I had no idea what it was. As I slowed down I heard a crunching sound and thought that I had run over a bottle or something. But my tires seemed to be OK… I had to cross 4 lanes of traffic to get to the shoulder and when I finally parked the car and turned around I realized that my rear driver’s side window was completely blown out. That crunching sound was the glass falling out onto the highway. 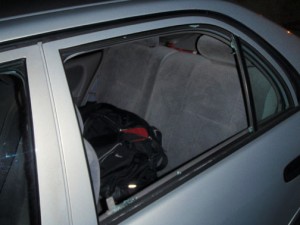 But how did the window break?… Did a rock hit me from the side? Nah Erin, you were in the far left lane? Did someone shoot at the car? Come on Erin, stop being so dramatic. Did Jazmine Sullivan run up on me? Really E? That’s a long way to go for a joke…

I had stopped on the shoulder just before an exit ramp. And as I’m standing beside the car surveying the damage, a driver that was being nosey and looking at me slams into the back of the car in front of him waiting to get off at the exit. Literally this happens MAYbe 5 feet away from me. I was on the phone with my friend at the time and I screamed. I think I almost gave him a heart attack. 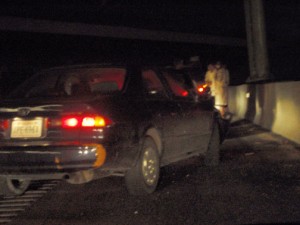 Scary stuff. If you visit here pretty often you’ll remember the scary experience I had in the car last month… Strange thing is there was a common thread in both of these incidents–the purple shirt pictured below. 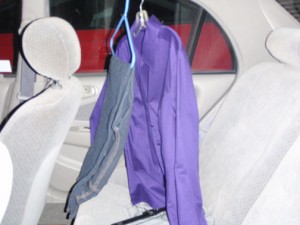 Is this shirt the devil or...

It was hanging in the same window during the ice storm in January because I was planning to change into it when I got to Richmond. 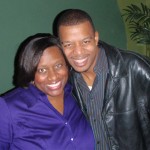 I called my friend Titi after I got back on the road [heat blaring and bundled up] and told her that I think that this beautiful shirt might be the devil. I’m not superstitious, but it is very possible that this garment is evil… Titi, being the spin-meister that she is, suggested that MAYbe the shirt was a good luck charm. Maybe the spin-out would have turned out worse and maybe the front window would have burst last nite if the shirt hadn’t been in the car.

I definitely don’t live in the HOOD hood, but it’s not the safest neighborhood in DC so I was a little concerned about leaving my car outside with the window busted up so I spent the nite with my friends Dana and Kenny in the high-rent district ;) Called the glass people this morning and they came to the house to replace the window. Whatever lazy person came up with the mobile glass repair concept is one of my new favorite people.

I told a couple folks about the exploding glass and all but one had never heard of such a thing. My girl Randi said that same thing happened to her once. So I Googled and found TONS of links about exploding window glass. The all-knowing-and-always-100%-correct-Wikipedia explains the top reasons for exploding glass here. Interesting stuff. Life has been quite interesting as of late.

Looking forward to seeing some of you guys out at the Valentine’s Day show this weekend!

4 thoughts on “I’mma be on TV, Jazmine Sullivan, and is this shirt the devil?”