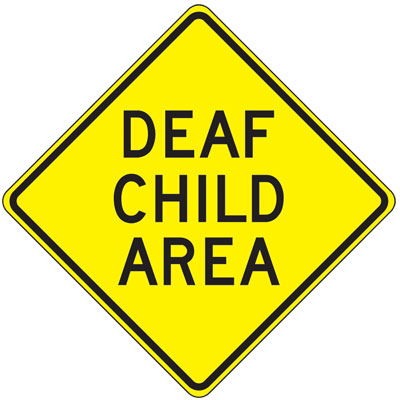 OK, so I live on a one way street (literally and metaphorically) thats just a block long. And at the end of my block there are two signs that say “Deaf Child.” I’m sure y’all have seen them before. The purpose of these signs of course is to warn drivers to proceed slowly down the street because there may be a child playing who does not hear the car approaching… blah, blah, blah.

Most of my neighbors are older folks but there are a few families with kids. So after living here for 2 years, the other day I got curious and asked one of my neighbors if they knew which family had the deaf child. And his response was, “Oh that deaf boy been grown and moved out. I asked the city to take that sign down years ago.”

That’s what he said.

What I heard was, “The rest of these little suckas that can hear are fair game.”

Now maybe I just interpreted it that way because I’m a comic and that’s what I do, but really, what’s wrong with having the sign there? Doesn’t it have the potential to make the kids — and less observant adults — who do live on our street just a little bit safer? I mean I’ve watched more than my share of Law and Order and I’ve never seen anyone get off using the ‘but this kid could hear‘ defense. “Your Honor, you can’t tell me he didn’t hear me busting them caps around the corner…”

I dunno. I’m just rambling. Have a good weekend.