Every now and then something happens that reaffirms my belief that people are good.

I had a show last nite in Charlottesville, VA. I parked my car in a parking deck in DC yesterday afternoon, and when I came back to the car to leave for my show, the parking lot attendant told me that I had a flat tire.

Inconvenient? Yes. But I’ve changed dozens of flat tires, so it wasn’t a huge problem. I asked her if the car was in a spot where I had room to jack it up and she said yes. Cool. So the man who parks the cars walked me down into the garage and I popped my trunk and pulled out my spare… only to realize that it was flat. I then remembered how I had a flat last winter and never took my spare to be fixed. Typical me.

But what to do?

I didn’t panic or have a cussing fit because there really wasn’t anything I could do about the situation. It was too late to try and get it to a garage and have it fixed because they would be closing for the day. I can count on 1, maybe 2 fingers the number of shows I’ve had to cancel on really short notice. And I absolutely hate to do it. But sometimes things happen.

I called the guy who booked the show I was headed to and told him there was no way I was gonna be able to get my tire(s) fixed and make it to Charlottesville in time for the show. And just as I was about to go call a tow truck, the parking lot employee who walked me down into the garage offered to lend me his donut.

I couldn’t believe it. I tried to explain to him that I needed to drive like 250 miles round trip and that I could buy him another donut, but he said for me not to worry about it and to just take it. I couldn’t believe it. I was kinda in shock. And I know I shouldn’t have taken a trip that long on a donut, but I chanced it anyway and made the drive down to Cavalier Country with no problem. I was driving Rte. 29 so it wasn’t like I could speed anyway. I got there in plenty of time and it was a really good show. Plus I made enough money to cover the two tires I was gonna need to buy and then some. I was a little worried about the trip back on 29 and I-66. It was dark and there’s not a lot out there. But again, made it home without a hitch.

The whole trip I just kept thinking what a nice GUY!!! I’m not accustomed to people being that generous. It’s kinda like when I was in Nebraska a few months ago and I asked the woman at the hotel front desk how to get to the nearest laundromat (I was walking). Instead of giving me directions, she left the front desk to drive me, and then gave me her cell number to call her when my clothes were finished drying. I was totally taken aback and felt as if I was taking advantage. People that nice almost make you feel bad about yourself. 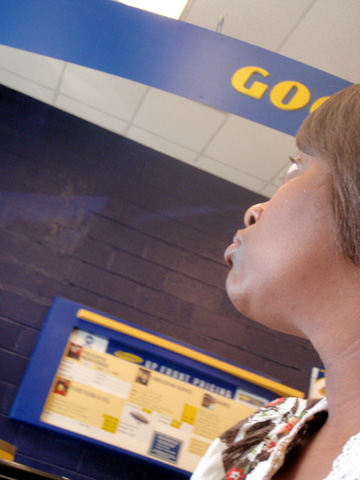 This morning I spent 4 hours in a Good Year trying to buy two new tires. Why did it take so long? I have no idea, but I just sat tight and watched the Today Show, the Olympic women’s water polo gold medal match (damn, that sport looks hard) and a little rhythmic gymnastics. I felt like getting upset about the wait would just cloud the high I still had from yesterday’s good deed … and I wasn’t willing to risk it.

I went back to the garage today and returned the donut to my good samaritan — though I don’t know how much use it’s gonna be after my trip last nite. I tried to give him some money as well, but he would not accept it. When he walked away I gave it to the cashier to give to him. I hope he takes it. But if he doesn’t accept my token of appreciation, it’ll just make me heart him even more.

If you get the chance today, do something nice for someone. Or at least offer someone a genuine compliment. It’ll make you both feel better.

One thought on “Good people”