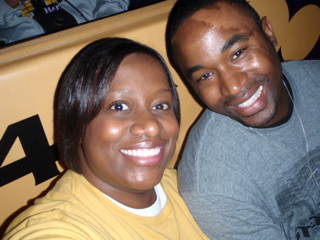 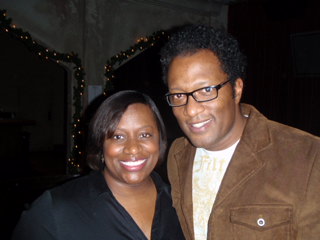 Me and the HILARIOUS Billy D. Washington. If you’re not familiar with Billy, apologize to and then forgive yourself and then look him up. He is just too………. ;) My favorite two take-away lines from his act that nite…Â  “I just found out my great-great grandfather was a runaway slave… because my great-great grandmother was a bitch.” and Nicorette sounds like a really small Black person.” I heart him. You should too. 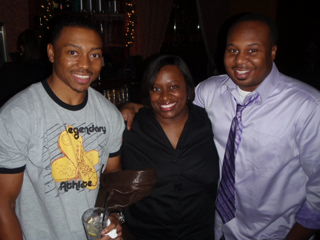 This is me with fellow comics Na’im Lynn and Roy Wood, Jr. Neither of them was on the show They just came out to show support. And of course Na’im wouldn’t miss an opportunity to remind me that I’m pretty funny… “for a chick.”

After we left the showcase a bunch of us headed over to an after-hours karaoke spot — which means I’m like 2-2 on karaoke during trips to LA ;) I ran into two friends from college there. Random. The thing I didn’t like about this karaoke nite is that the people there were serious singers. No, I mean with choreography and everything. They probably all have pending record deals… which makes it quite intimidating for someone who can’t really carry a tune but just came out toÂ  sing and have a good time. Damn Hollywood. 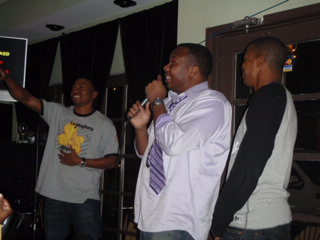 This is Na’im, Roy and my boy Micah singing “Regulate” by Warren G. A good choice. No real hard vocals there and we’re in LA so everybody sang along. I soooooo wanted to sing “Superstition” or “Proud Mary” — those are two of my favorite karaoke songs — but I didn’t have the nerve. :(

We’ll find out who won the contest later in the week I believe. I will keep y’all posted.

We pretty much had nothing but meetings all day yesterday. Meetings and lots of driving. Which in LA, means lots of TRAFFIC. I rented a car and had a morning meeting in Santa Monica. I didn’t have a GPS so I took the route that Randmcnally.com told me to take — the 405 at 9 am.

Damn. Damn. Damn. It was totally the traffic that you see criminals and cops get caught in in the movies. I was expecting some high speed chases, maybe some vehicles flipping over and bursting into flames… But what I got was a parking lot and Ryan Sechrest “On the Air”.

My last meeting for the day was in Beverly Hills which was super cool. I saw tons of stuff I’ve only seen in movies, like the Beverly Wilshire Hotel and Spago. 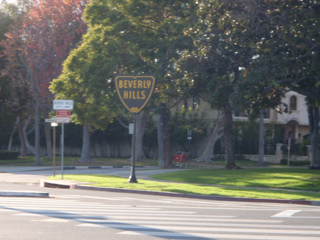 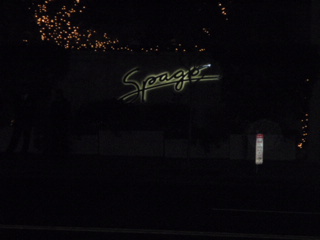 A couple of us were gonna run in there and get an order of filet mignon to go, but we changed our minds and ate Cheez-its in the car instead.

Tuesday nite I did a spot at the Improv which was cool. Then I headed back to the hotel and passed out. I’m headed to Indianapolis this afternoon for more fun at Morty’s Comedy Joint. If any of you are based or know someone based in Indy, send them out to the shows this weekend. It’ll be a blast, I promise!