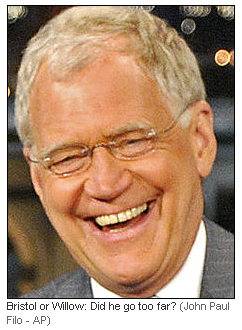 I was quoted in this article in the Style section of Saturday’s Washington Post about the David Letterman/Sarah Palin ‘feud’. If you don’t feel like reading the entire article, here’s what was attributed to me:

Letterman shouldn’t apologize, if only to preserve the comedian’s prerogative to satirize the powerful and to be offensive on occasion, says Erin Jackson, a rising local stand-up comic. “People read things into jokes that you never meant and never intended,” she says. “If [Letterman] got into a cycle of apologizing for a joke or comment, you don’t know where it would stop, or how far back you’d have to go to satisfy everyone. I don’t think he can be who he is if he started doing that.”

Adds Jackson: “When you give it to everyone equally, as Letterman does, as all the late-night people do, you kind of have to take it. It’s like demanding an apology from the National Enquirer — it’s better to just get over it.”

The writer made it clear to me that he didn’t want to examine the political angle of the story — he just wanted the opinion of a comedian on whether or not it was a good idea professionally for Letterman to offer an apology. I’ve offered quotes for articles before, but this weekend was the first time I’ve ever gotten negative e-mails about my comments. Sure I’ve gotten random, anonymous comments on YouTube, etc. But this was full-blown “I’m gonna give you a piece of my mind AND my first and last name and e-mail address.” You know, grown and sexy hate mail.Â  The first message came at like 1 in the morning. I was out with friends and heard the Berry go off. I was crossing my fingers hard for an unexpected booty call …

By the time I woke up the next morning there were 3 more just like it — two were really ugly. And mainly they were talking about the double standard re: negative media coverage between Palin and Obama, Dems & Republicans, etc. I was a little upset at first, but then I realized hey, there’s no way everybody’s gonna agree with me all the time. Plus each e-mail meant that someone who’d never heard of me beforeÂ  Googled me and found my site and then took the time to e-mail me. And love it or hate it, that is progress. I’ve never been comforted by the “there’s no such thing as bad press” mantra before, but this time, I totally got it.

I responded to everyone who wrote me. Just to clarify my point. And I must say that almost everyone wrote me back and said they actually watched my clips and would like to come out to a show — which goes to show… people can differ politically but funny is universal! So even if you didn’t agree with my comments and/or found this blog thru the ‘who linked here’ box on the WaPo site, come on out — Democrats, Republicans, Indies, Communists — and catch a show! I promise there’s no politics in my act — unless you consider me talking about how hot the President is ‘politics’ ;) Tee hee ;)

I’ll be headlining at the IMPROV in Washington, DC July 2-3. You can buy tickets here:

Hope to see you there!