So I went to visit Auntie’s Baby and family for Thanksgiving. Yaaaaaaay! I knew that he wouldn’t remember me because it’s been so long since I’ve seen him so I figured I’d have to come bearing gifts — you know, to speed up the bonding process. ;)

But what to get him? Well, I had to think about what I already know about sir Roman. He likes airplanes for sure (you gotta watch this)… 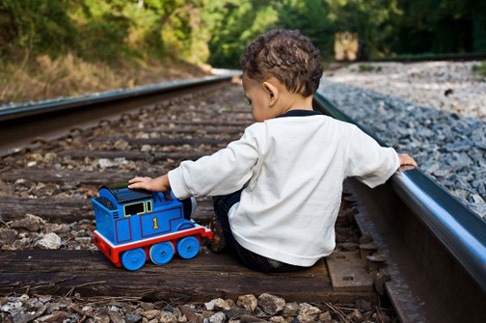 Roman on the train tracks with Thomas -- isn't he great???

And I know he has a new fascination with trains — Thomas the Train in particular. I finally decided on something we could all enjoy and that his mommy and daddy wouldn’t get mad at me for sending. So I sent a Thomas the Train-themed Edible Arrangement — YUM!!! It came with Thomas the Train balloons and a TT container that could later be used to house all his other Thomas the Train paraphernalia — he has at least 1 or 2 Thomas toys on his person at all times. 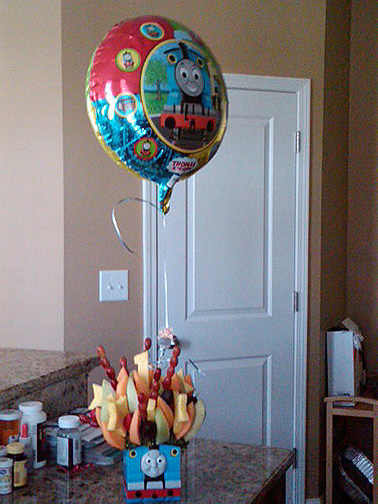 Thomas was a hit! Roman especially liked the pineapples that were cut into the shapes of stars and the number “1.” But his favorite thing I think was to let the helium balloon fly up to the ceiling and then ask one of us adults to get it for him… You can’t help but indulge kids with things like that b/c it makes them so happy! I love it. Once he assessed that Auntie Erin was cool, we really began to bond. We went swinging at the park and we [read: I] made up a new song about Thomas and Percy and he sang it with me (and a couple times on his own) over the course of the weekend. AND rumor has it on Saturday when he woke up and I wasn’t there, he was walking thru the house calling for me. 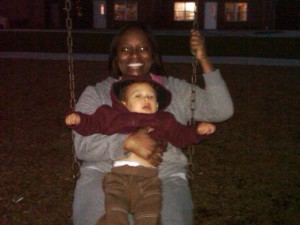 Yesssssss! Way to leave ’em wanting more! ;) Haha… probably won’t be able to see him again until February but now that he’s older he should remember all the fun we had. Hope you all had a Happy Thanksgiving as well! Later, EJ

One thought on “Bribing Auntie’s Baby and Thanksgiving”