Yeah… so I just got back from my show at U. of Maine and despite the -21 degree weather, I really had a good time. There was a pretty nice turnout, they treated me great and I got a cool new lobster shot glass ;) Ha ha… I still collect shot glasses because I am 12 years old ;) 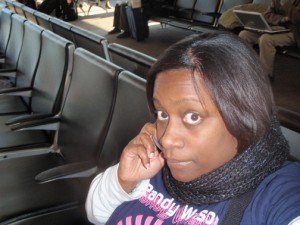 At Logan airport listening to the weather in Maine: -21 degrees

At the Legal Seafood ‘substation’ in Logan, the waitresses just give you your own credit card machine to pay for your meal. I had never seen anything like this before. It calculates a 15%, 18% and 20% tip and lets you choose between the three. Um… how ’bout zero %? I just rang myself up at a restaurant. 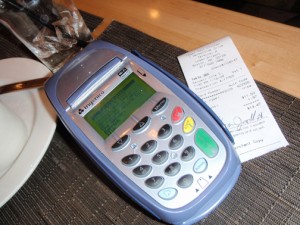 While I was eating, I was aurally assaulted by Ashford & Simpson’s ‘re-interpretation’ of their hit song “Solid” entitled “Solid as Barack.” I couldn’t believe Nick and Val went there. Nobody else in the restaurant seemed to be bothered as much as me. I dunno. I just hate to see two of my favorite R&B songwriting icons (Ain’t No Mountain High Enough, I’m Every Woman, Solid, Ain’t Nothing Like the Real Thing, You’re All I Need to Get By, ) sell themselves out like that.

Why’d you do it, guys?… You can’t possibly need the money. 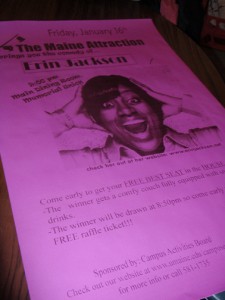 My U. Maine poster

This is my poster from the U. Maine student center and below is a photo of me and some of the students who came out to my show. 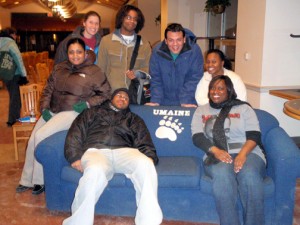 They told me they were more Black kids on campus, so I asked "where he was."

The girl in the creme shirt behind me said that we better show the logo on the sofa or no one would believe this photo was actually taken at University of Maine. Ha ha, she was so right ;)

I did something at the end of this show that I’ve never done on stage before, but I might consider incorporating into some more of my college shows. It may have been a one-time/in-the-moment kind of thing, but I got to a part of my act where I asked for some crowd participation — basically for some of the students to talk back to me about some embarrassing things they may have done and no one wanted to speak up. So I suggested that we play the ‘penny game’ from my youth… I say something and then if they’ve done it, they throw a penny at the stage.Â  I said it as kind of an aside/throw away… But halfway thru the first statement change started flying towards the stage.

And it wasn’t all pennies either. Someone threw nickels and dimes… I kept all the change. But also it made me laugh. Anyway, had a great time, all my flights were on schedule, and there’s less than 24 hours til the Eagles clinch their Superbowl berth. SO excited, can’t wait. 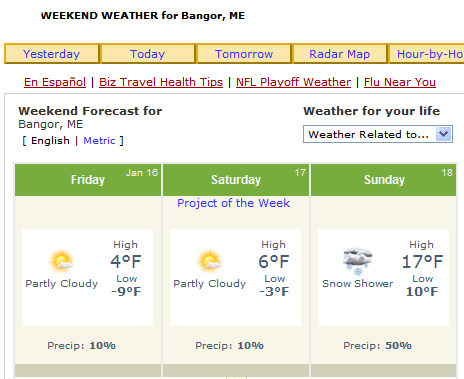 I have a show tomorrow at the University of Maine. It is going to be 4 degrees.