Last nite while I was on my way to Richmond for a show, my car hit a patch of ice and I spun out on 395 South. I spun from one side of the highway all the way across to the other side and back — the whole time doing 360’s. I heard voices in my head telling me to “steer into the spin” but I didn’t know which way that was and all I was doing was making it worse. When the car finally stopped spinning I was facing oncoming traffic and all I could do was cover my face and brace for the impact.

No one hit me.

There were four lanes of traffic headed towards me at freeway speed in pouring down rain and the front car in each lane was able to stop short of hitting me without causing any additional accidents. As things started to back up, the people behind them began to honk their horns. But we all sat there for about 10-15 seconds looking at each other. I stared each of those people in the face before I pulled off to the side of the road and cried.

I was fine. A little shaken up. But alive.

After I gathered myself I had a decision to make. Do I go on to Richmond for the shows I promised a friend I’d be there for? Or do I go home, decompress and meditate on what just happened? I decided to go to the show. God had spared me, and there would definitely be time for contemplation later, but I figured that what I needed to do right then was thank and bless Him, and go on to the show and talk it out on stage. That may sound weird to some folks, but for me it was a no-brainer. 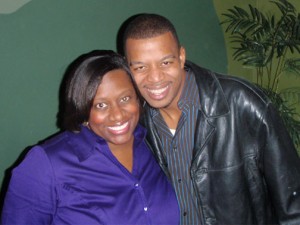 This is me and my friend Bam after the show. Looks like a regular ol' nite, but I assure you, it was not.

I made it to the club just in time for the show, so I only had enough time to change my shirt and finger through my hair before I had to go up. But I’m glad I didn’t have a lot of time. I started my set off by saying, “I’m not sure if this is any way to begin a comedy show…” And then I told them the story. The craziest thing I’ve learned as a comic — and you hear this all the time — is that there is humor in every situation. It really is true. Even in what had just happened to me. I told the audience how as I’m facing oncoming traffic waiting for the blow, my GPS said,“RECALCULATING. WHEN POSSIBLE MAKE A U-TURN.” Obviously I knew I was facing the wrong direction. That got maybe the biggest laugh of my set.

Not that I recommend harrowing, near death experiences as a means to come up with new material, but it happened nonetheless. Today I’m a little sore. A little stiff. Still a little shaken up. And super grateful. Perhaps this is what had to happen for me to make some necessary changes in my life. Humor really is the best gift we were given. Believe that.