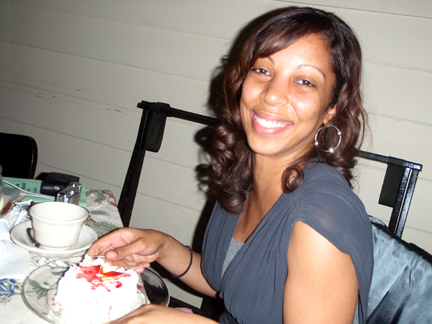 Yes I know. I’m old. But we were both really looking forward to it. From everything I’ve ever seen or heard about dinner theatre, I expected it to be kinda cheesy. And Blair Mansion Inn did not disappoint. That is not to say that we didn’t really enjoy ourselves. We did! Me and Kellz are kinda cheesy too ;) 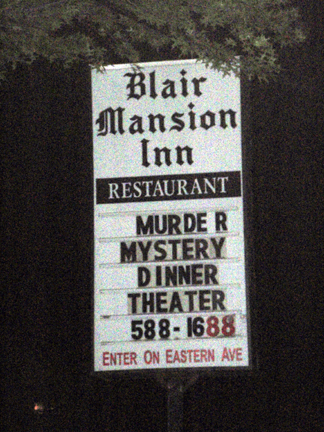 We got there around 6:30 for drinks and ordervs (I refuse to Google to find the correct spelling of that word. I’m comfortable with the afore-typed ignorance). Then came the dinner buffet. We each ordered a glass of Riesling and waited for the show to start.

The crowd was really interesting. There was a group of recovering military and staff from Walter Reed Army Hospital there, some senior citizens, a table in the corner that looked like the Negro Last Supper, a family with a little kid (who totally didn’t get the spank-the-monkey reference made by one of the ‘actors’ but laughed just the same), a woman from Sri Lanka, a couple from Budapest (they were ‘hungary’ — not my joke).

Here’s a synopsis of the play we saw —  Three Strikes & You’re Dead:

The Maryland Crabballs, holding a strong last place position in the Virtual Baseball League (VBL), Is proud to announce a major acquisition to its starting line-up. Jose Canstriko, the league’s all-star center fielder will be joining the Balls, effective immediately. Excited at the prospect, young billionaire owner B.O. Smelly has commented that “Jose will be a valuable new member to our baseball family.” The team manager, Major Constance Strain, is somewhat concerned that this addition to the roster could disrupt his plans for the team, which is lead by its current center fielder, Willie Daze. Willie is accompanied by his overbearing wife, Stormy Daze, who’s here to protect her investment…namely Willie’s million dollar contract. Hopefully, Willie’s agent, Anita Deal, can pull some strings and get him a better contract.

The question is, when the dust clears and it’s all on the line, will the outcome be “fair or will it be a strike out” in the most permanent manner? Namely, Dead.

You be the judge……

Jose died at the table next to us — with the hungary couple. 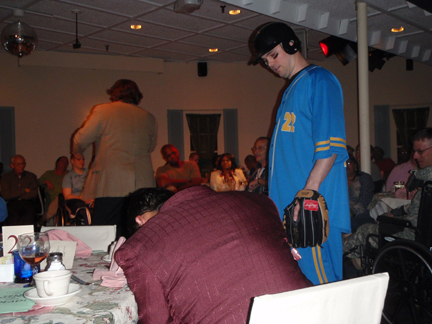 Getting rid of the evidence…. 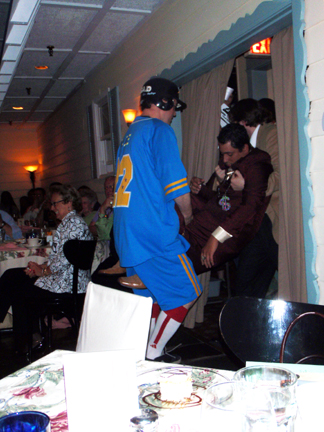 Did the compulsive gambling team manager do it? 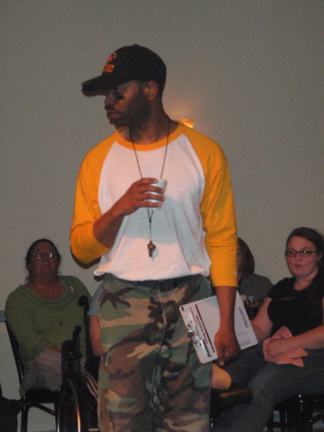 I liked that the show was interactive. We were encouraged to talk to the actors, which, as a stand-up, is weird at first… You kinda don’t want to interact because it feels a hell of a lot like heckling, but then you realize that’s what makes the show. By the end I was just shouting stuff out. It was like payback therapy. I hearted it ;)

In the end, Detective Justin Case helped us to examine the clues and determine who the murderer was… 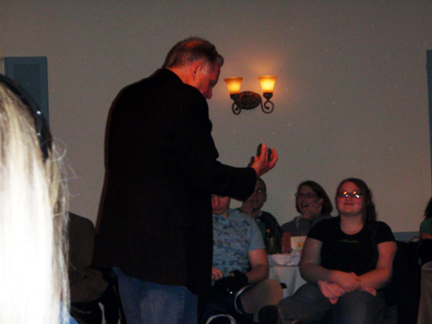 TA DA!!!! I won’t spoil it for those of you who are just dying to see this show. I would totally do it again. It was just like I thought it would be and that was fine with me. I recommend it — more for the experience than the theater.