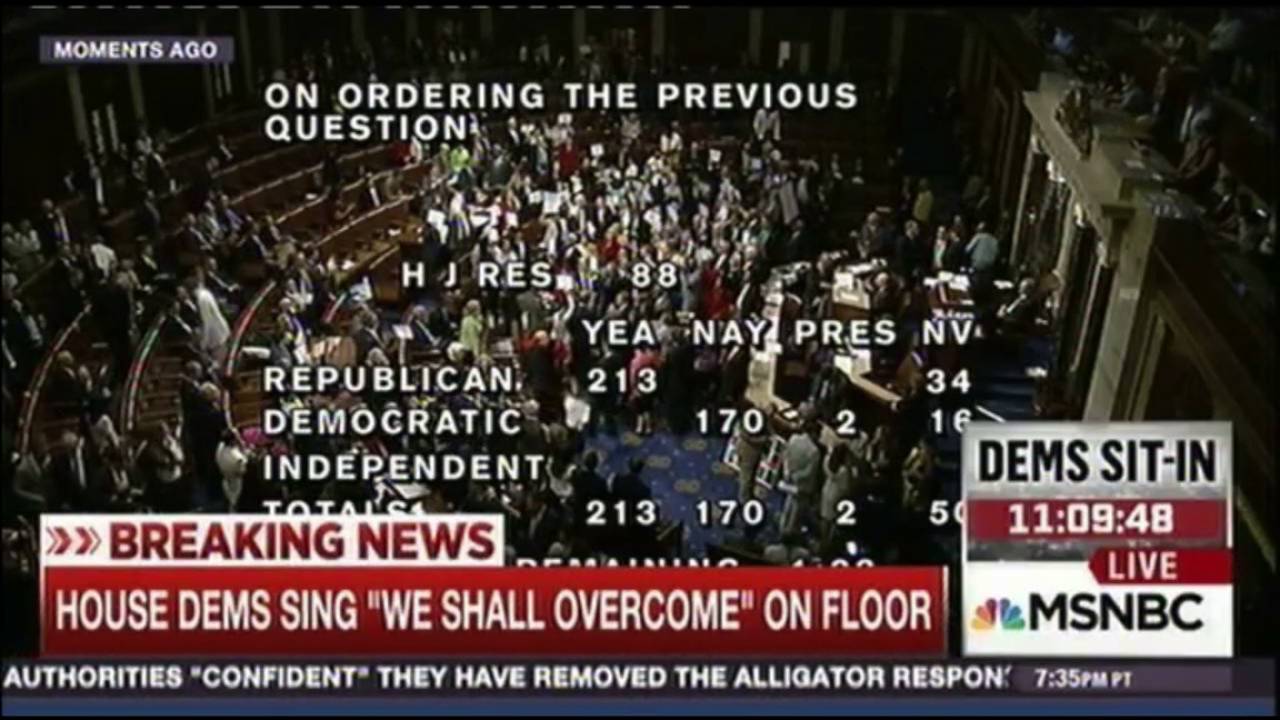 Congressional Democrats, led by civil rights icon John Lewis (D-GA), staged a sit-in Wednesday on the House floor to try to force House Republicans to put several gun control measures to vote. And I applaud Rep. Lewis for applying the tactics he honed during the 1960’s to this situation and House Dems for holding the floor (#hoflor). If 90% of Americans are for background checks, then why are nearly all House Republicans against it (that question is obviously rhetorical)? They can’t all represent the remaining 10% of Americans. The Dems definitely wanted the bills to pass, but equally important, was their desire to have get their Republican colleagues on record against safety measures like these in the wake of the Orlando attack. The fact that the protest happened the day before summer break means they can’t continue it until over a week from now, at which point their attempts to retake the floor will most assuredly be met with more resistance, and may cause them to appear more petulant than principled. It was encouraging, however, to see a portion of this Do Nothing Congress think outside the box to at least try and do something meaningful—even if it was unsuccessful in the short term. It got voters to contact their representatives and brought even more attention to the issue. And hopefully it was the first small step towards universal background checks.

Now as for that “We Shall Overcome” remix posted above?

That’s when the sit-in jumped the shark. I feel like we all know whose idea that was, and it was a gross misappropriation of that anthem. “We shall pass a bill someday?” Word? “We shall overcome hate?” That wasn’t even the lyric during the height of the civil rights movement. How about: “We shall overcome dependence upon lobbying dollars by implementing public campaign financing someday” or “We shall neutralize the NRA someday…”

When Rep. Lewis had those other reps singing “We Shall Overcome, u know they were like “Ummm… Well if he says it’s okay…” #holdthefloor

Le sigh. I respect the effort, if not the soundtrack.

I got into a discussion on Facebook with someone who questioned the 90% of Americans for background checks (including NRA members and other gun owners) figure, so I posted the articles listed below for reference. Because I have no desire to debate facts. The “No Fly, No Buy” bill definitely has problems, but I think we can all agree as to the spirit of the bill. If Republican lawmakers were behind background checks, but opposed that bill based on absence of due process, etc. I could totally understand that. But to be against any and all common sense gun control measures, and be unwilling to work with their colleagues to try and improve upon it and/or find any common ground? To quote the great philosopher, Alanis Morrissette: “I see right through you/I know right through you.”