This is all that’s left of my car. 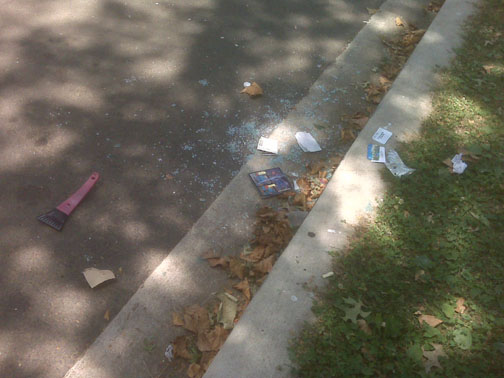 Someone stole it early yesterday morning. There were 7 car break-ins on my block, but mine appears to be the only one that was taken. As y’all know I need my car to do my job. Travel is a huge part of being a comic and if I can’t get from one gig to the next… well you understand.

The insurance company tried to comfort me by telling me that 65% of all stolen cars are recovered. But that means very little when I have to be in Jersey tomorrow nite and had to pay to rent a car on my own. And the 35% chance of having to get a new car (not new, new though. I’ll never do that again) when I have exactly no money is so frightening.

The thing I will never understand (and I’m aware that this is going to sound awful) is why people who don’t have much and live in the hood steal from other people in the hood… It’s like if you have to take sh!t, go to the high-rent districts where people have cars to spare. We’re over here trying to make it just like them. They stole my 10-year old Corolla which has been awesome and hella reliable but also had just 3 hubcaps, lots of scratches and a big dent on the right side. It’s pretty obvious that that’s all I have. The GPS I was gifted that helps me out when I’m working on the road, my video camera, tripod… all of that was in there. I have no idea how I’m gonna recoup that considering the Blue Book of the car is less than $2,000 and well, I’m a comedian who’s had a very slow summer. It was worth so much more.

They gotta find it. That’s it.

6 thoughts on “Someone stole my car. But they took so much more.”