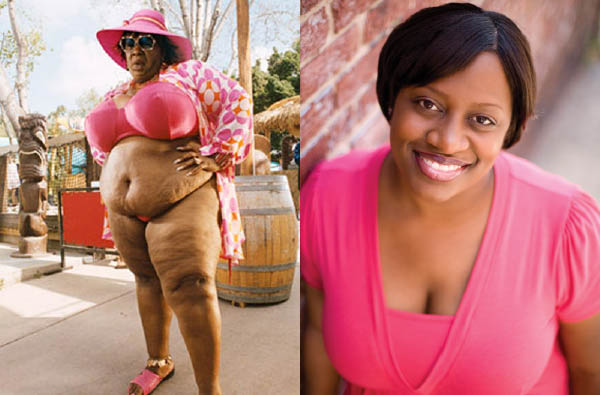 I see how you could get us confused… what with our chocolate complexions and fondness for Fuschia (rhymes with Rasputia by the way) but I have to say — and you’d better freakin’ agree — that that’s where the similarities here stop.

What are you talking about EJ? Well let me explain. I did a show this weekend with good buds Kojo Mante, Jason Weems and a very funny dude I just met called Adrian Rodney. It was a benefit show in the Lounge showroom at the DC Improv. Two sold out shows and I was proud to be part of it.

First show for me went great. Got the opportunity to do a little more time than I originally planned so I got to work thru some stuff. It was right on time. Second show about a minute into my set, I made a comment to a guy in the front row. Then after his response I told him I wasn’t scared of him because he was light-skinned. And he responded by calling me “Rasputia” — who in case you were confused — is the one on the left.

What surprised me the most is that in the moment I wasn’t insulted at all. I actually wanted to laugh because it was such a specific heckle. He could have called me ‘fat’ or ‘bitch’ or you know ‘fat bitch’, but no… He wanted everyone in the room to know exactly which ‘fat bitch’ I looked like. And I can’t hate on that. Hahaha… What’s more embarrassing?… being compared to Eddie Murphy in a fat suit, or admitting that I saw Norbit? I decided that I would address it and thus began the awkward nature of my set at the late show.

Twice I went to say something else to him but I kept telling myself. You are doing a benefit show for a very sensitive subject. This is not the place. DO NOT engage. But it was hard. About two jokes in I kinda got back on track. But when I got to the section of my act where I usually tell a group of jokes about size and weight and perception I got mad — again, not at his comment — but at the fact that now I didn’t get to be the one to bring up weight so it lost some of its punch. I did two of the jokes and right before I remember saying, “Here come the fat jokes, sir. Sit back and enjoy.” But I didn’t even get to the more clever bits, which are among some of my favorite bits in the act because by that point the topic had been addressed. Oh well. (pokes out bottom lip).

The table and the Rasputia guy enjoyed most of the rest of the set I think – I mean I saw them laughing. But I had to run to get to another event and I couldn’t stay til the end of the show. I’d have loved to talk to him and literally tell him how funny his comment was and how he threw me because literally I was standing there like… Good one. Ha! Anyway, that is what happened to me this weekend. I’ve been a lazy blogger. Trying to get back into the swing.

5 thoughts on “Oh, NOW I see the resemblance…”