So I just got back from a week doing colleges in Michigan and Iowa. And I couldn’t stop praising the folks at Cedar Rapids Airport Security because instead of asking people to toss their brand new toiletries and unopened drinks in the garbage as they pass through security, they had a donation bin for a local homeless shelter there so that new, unused items didn’t go to waste. Great idea, right? I wasn’t even angry about having to get rid of my apple juice. It seems like a no-brainer now, but I travel a lot and I’ve never seen that before. I heart midwesterners. I even bought a super cute t-shirt that says “There’s more than corn in Iowa.”

Even though there isn’t.

I had fun at all the schools and though it snowed every day in whichever state I was in, it didn’t interrupt my driving or flying. By all accounts it was shaping up to be an incident-free trip. But on Monday morning when I was boarding my flight, I slipped on a patch of African-American ice on the Delta jetway and fell really hard. They radioed for help and didn’t wanna move me. I thought I had just scraped up my knees and elbows really badly but later that day I began to feel an awful pain in my neck. Had me lying on my bed screaming like Ezal from Friday.

By the next morning I was pretty much immobile and I filed a claim with Delta to pay for my medical expenses. 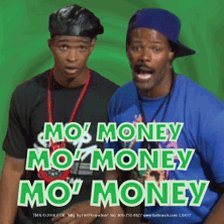 So where are we going, y’all? Flight’s on me.

Just kidding of course. Totally not suing Delta. Yet.