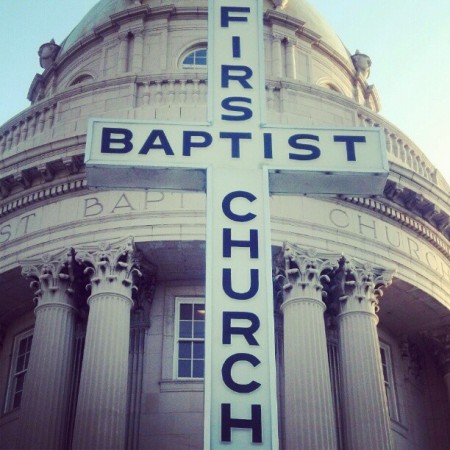 So I flew down to Tampa on Wednesday to do a show at University of Tampa. This church was just across the street from campus and I thought it was so beautiful I had to stop and take a photo of it. Booker T. Washington, thanks Instagram for turning my cell phone pic into this!

Perhaps if I spent more time in places of worship such as this, I wouldn’t find myself in situations like the one I experienced earlier that morning. Exhale… So, OK, I was headed to tiny Newport News (VA) International Airport (sidebar: I would like to see proof of their ‘international-ity’; I can’t imagine what other country they fly to). The sun was just coming up. It was nearly blinding me, so I had to drive slowly and squint in order to follow the signage pointing towards the parking lots. Well, the lady behind me had no patience for me. She kept trying to pass me and was tailgating me, but she couldn’t get around me. She started honking and from my rear-view mirror I could see her making some really aggressive gestures. I tried to let it go at first because I realized I was driving poorly. I even gave her the “hey-my-bad-please-forgive-me-but-I-cant-see” nod/gesture in the mirror, but she wasn’t having it. When I finally found the parking lot and pulled up to the ticket dispenser, she laid on her horn.

That’s when I lost it. That is when Miss Benita went off.

Because of the angle I pulled in at, I had to put my car in park and get out to grab the ticket. I was about to get back in, but her leaning on the horn combined with whatever she was shouting at me from the safety of her car caused me to lose it. I turned and started walking towards her car… And that’s all I’m going to say about that. Because I’m not very proud of what happened next.

Fast forward to me finding a parking space and getting on the shuttle to the terminal. I thought I was scot-free until we got to the last parking shelter and had to pick her up. She and I were the only two people on the bus, and we rode over to the terminal in complete silence, avoiding eye contact. We both acted ugly. But in an ugly contest, I’d have been the undisputed victor. I felt really badly about it, but anyone who’s ever ridden in a car with me, or been on the phone with me while I’m driving knows that my road rage is legendary. I’m generally not aggressive without provocation, but tick me off and it’s… it’s…

I don’t know what it is about my car, but it’s where all my frustration melds together and I can get it all out. Sometimes my anger gets jumbled and misdirected: “Oh, so you think you can just cut me off without a blinker, then stop short and sleep with my cousin, you no-follow-room-respecting, cheating ass bastard?!???” And the insults I hurl rarely make sense — I called somebody a “bastard fart” the other day — but it feels good.

I’m gonna ask Baby Jesus to help me curb my rage though. I’m not trying to get “50 Cent-ed” over some bull. Pray for me. For real.

One thought on “Baby Jesus, please heal my road rage”