What can I say?

I was hoping this wouldn’t be my last Eagles blog for the season. And my boys did not let me down. We are exactly where the Giants were last year. 1 win away from the big one. Wow!

Being from Jersey, I know tons of Giants fans, but yesterday and today weren’t nearly as fun as I’d hoped. I had planned to talk lots of smack, but nearly everyone was super gracious. I actually had several Giants fans e-mail and text “Congratulations.” I know, right?… I didn’t realize my friends and family were such good sports … That’s no fun.

My friend Kenny (below) was not one of the people who called with congrats. He was pretty bitter. This is what Kenny wore thru most of the game. 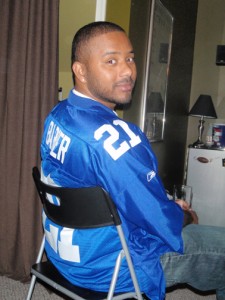 But with about 2 minutes left in the fourth quarter he took off his jersey and switched into a Georgetown Basketball t-shirt. Some fan…After the game was over, he tried to kick me out of his house. 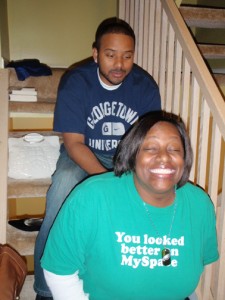 This is me trying to hold my ground.

You’ll notice that I don’t have my Eagles gear on, but that’s because I need to do laundry. I still wanted to feel like I was suited up so I grabbed the only other green and white t-shirt I have. Not exactly NFL apparel but it did the job ;) … And of course I had on my dog tags.

I am so gassed about next week! Bring on them Cardinals!!!