OK, so yes I know that was a really lame title.

But I wanted to share one other cool thing that happened this weekend. The manager of the club where I was working, Steve Trevelise, has a sports talk radio show on WIP 610 AM in Philadelphia. During the weekend, we got to talking about my love for the Eagles and the Happy/Sad Eagles Chronicles here at You’re Welcome, and he invited me to be a regular guest throughout the remainder of the season. Cool, huh? Steve is a Giants fan and so I don’t think it’s really fair that he gets to be on sports talk radio in Philly ;) but I’m excited about the show. It comes on Friday overnites, so hopefully if things pan out and I don’t embarrass myself too badly, I’ll post some of the clips here or on the main site. We’ll talk about Eagles football and comedy, and why I’m not working any clubs in Philly… (This last agenda item was suggested by me and as yet, has not been signed off on by Steve ;) 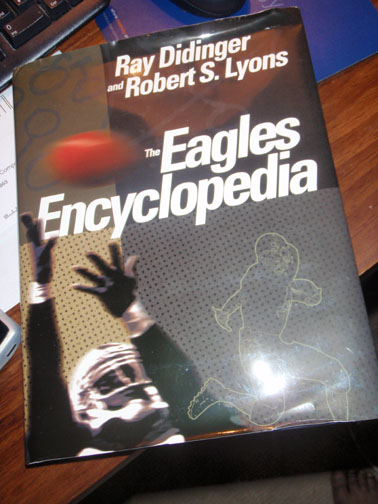 It lists every player and chronicles every season from the beginning of the franchise thru our 2004 Superbowl season. I know, right… THANKS STEVE!